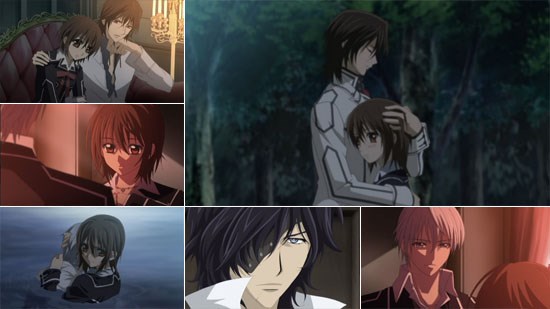 The Vampire Knight series continues with volume two, but does it start to make some headway over the first volume?

The unthinkable has happened as this batch of episodes begins, with Zero awakening as a vampire and attacking Yuki. Kaname manages to subdue the changed Zero, but now things will never be the same again. Zero stays with the day class even though he has become a vampire and with the arrival of a vampire hunter, things are only going to get worse.

What is interesting about this volume is the development of the relationship between Zero and Yuki. As Zero battles with his instincts to drink blood, Yuki is trying her best to keep Zero’s humanity and it is here that some of the most interesting plot developments happen for the series. It serves up a slice of wonderful drama to see this unfolding, with the constant struggle that the two endure while making their relationship ever more stronger.

While the first volume was more about setting the scene and the characters, this volume takes its time going through the ups and downs of the pair's relationship. It’s a fantastic piece of melodrama and for those that enjoy this kind of thing you will no doubt enjoy it.

This DVD also shows the history of Yuki and Kaname’s relationship and the eventual arrival of Zero to Yuki’s home. It’s an interesting look at the back story of the characters and how they have learned to deal with the issues surrounding the vampires, what they can do to the humans and the complex relationship between the three characters.

There are issues with this volume that should be brought to light however, most of these being technical in nature. The first and most glaring issue is that the DVD only contains the three episodes - though while the DVD is slightly lower priced, it is a break from the recent norm. Added to this, despite the reduced episode count we are also lacking extras, where the only "extra" is the inclusion of the standard Japanese soundtrack with English subtitles. There is a technical glitch on the disc, with the viewer unable to switch between audio soundtracks during playback. It can be done in the menu, but it is an annoyance to have to go back to the main menu to switch the audio.

For those that enjoyed the first volume, the second volume will be a welcome addition giving plenty of attention to plot elements that will give plenty of “what the hell” moments. However, those that found little to attract them to the series from the first volume will no doubt find little else here to entice them. While the episode count is disappointing compared to most releases, at least the episodes here are some of the strongest in the series.

Apart from the Japanese language soundtrack, there is nothing else.

7
Some of the strongest episodes in the series, but the DVD has a weak episode count.
LATEST REVIEWS