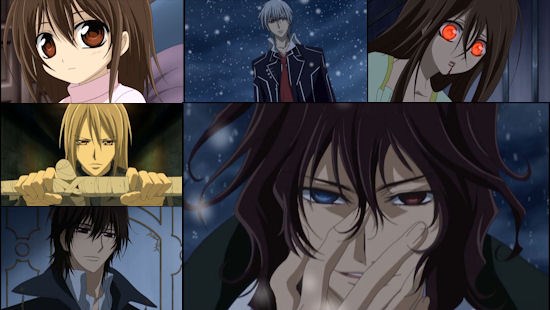 The previous volume of Vampire Knight Guilty on DVD left us with the mother of all cliff-hangers - a veritable "I am your father" moment if ever we saw one, although be warned that it does mean that we can't really review this third instalment of the series without risking some level of spoilers so, although I'll endeavour not to ruin things too much, look away now if you haven't watched volume two yet.

Impressive though the twist in its tale was, the real question is what the series intends to do next with the seismic shift in the dynamic between Yuki, Kaname and Zero in particular.  That said, across the three episodes on show in this volume it seems that there are far more important issues at hand than mere emotional entanglements, with the threat to Yuki herself growing exponentially while even Cross Academy itself sees its future thrown into question.  At the centre of this threat is Lord Rido, with a handful of flashbacks filling us in on that hefty missing chunk of Yuki's childhood as evidence of just how long-standing his interest in her appears to be - although we still aren't completely up to speed with Rido's intentions beyond some of the show's basic politics, there can be little doubt that he is the evil-doer du jour for the remainder of the series.

While previous volumes of Vampire Knight Guilty have excelled on the back of the chemistry and rivalries between the show's three main characters and the sometimes rather steamy encounters between them, these particular episodes change that focus by necessity by keeping these major characters apart for significant chunks of the volume - although this means that much of the aforementioned chemistry is lost, it does conversely mean that the moments where these characters do encounter one another are filled with emotional strain and tension, which in turn adds a different sort of colour to this portion of the series.

As much as I've loved the first two volumes of this series for its "proper" vampire overtones, this third volume of Vampire Knight Guilty does everything that is required of it to built to a fittingly dramatic and tense finale for the show, so it would be churlish to complain that it's moved away somewhat from what has made those previous episodes so watchable.  Certainly, there's enough here for fans of the franchise up to this point to get their teeth into (sorry, a bad pun I know), even if we are limited to just three episodes and some occasionally flaky video quality from this DVD bereft of any extras.

Its angle of approach might be different as its story progresses, but if you've enjoyed Vampire Knight up to this point then this volume certainly won't assuage those feelings - more importantly, with everything in place and ready for its final volume we could be treated to a rip-roaring finale to the series.

Japanese and English audio with English subtitles are all we get on this extra-free release.

7
This volume sees a shift in focus from previous instalments, but it continues to be a solid and very watchable story for fans of the series.
LATEST REVIEWS