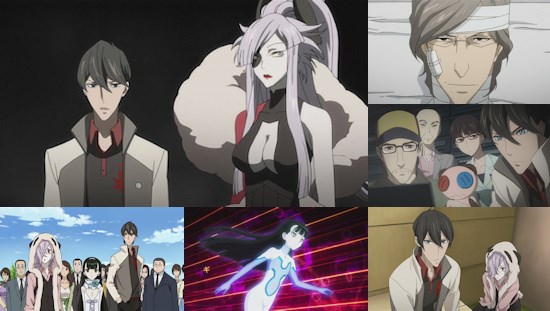 When we took a look at the first three episodes of Un-Go, we gave a slightly hesitant thumbs up to what we were seeing - it wasn't quite accomplished or consistent enough to really get our pulses racing but we very much liked what it was trying to do despite its occasionally stilted execution.

While it's often difficult for a series to gather momentum after such a beginning, it's more than a little pleasing to be able to report that the remainder of this series from the vaunted noitaminA programming block gets up an impressive head of steam for almost the entirety of the episodes under consideration here.

With episode four closing the show's first two-parter, we finally began to get a feel for the kind of additional strengths that taking more time over its mysteries can bring to the series, and thankfully this is a lesson very well learned from this point forth - most of the rest of the show spreads its ideas across multiple instalments while also running a far more potent on-going thread through them all the way to its climax.  This allows Un-Go to drill further into the depths of both each story and its war-torn future world as a whole against the backdrop of the ever-changing rivalry between "Defeated Detective" Yuuki Shinjurou and much vaunted businessman turned part-time sleuth Rinroku Kaishou.

Along the way, we see some important additions to the show's character roster; from a new assistant for Shinjurou on the one hand through to a supernatural being to rival or arguably even surpass Inga's own abilities on the other.  Introducing major characters mid-series can sometimes feel clumsy or forced, but thankfully here it works wonders and only serves to increase both the complexity and intensity of the mysteries inherent within the series.  Of course, by the final few episodes we find ourselves drawn into what seems to be a major showdown between Shinjurou and Kaishou himself - a state of affairs which goes through a delicious number of twists and turns as our defeated detective yearns for the truth, which of course is far easier said than done.

As much as it's easy to love a good murder-mystery series, Un-Go really stretches the legs of its intelligence throughout the latter part of the series - this isn't just a show about solving crimes, but a treatise on the nature of truth and whether revealing the full, unadulterated truth is really the best way forward in a civilised society.  This isn't a question that it seeks to answer as much as one to leave hanging for the viewer to ponder, and it's a juicy topic to ponder in itself even before its deployment of some excellent story-telling.

For all of its complexities, Un-Go always brings the watcher quandaries that feel solvable by the viewers themselves - despite its supernatural elements and some obvious obfuscation to ensure some of its bigger revelations are suitably surprising, you never feel frustrated that the series is pulling things out of thin air to suit its own agenda, making for perhaps one of the more accessible detective-based shows of recent times.  Perhaps the only detriment to this is the sheer number of characters Un-Go likes to throw at the viewer, complete with captions explaining who they are as well as their names - this is often hard to keep up as multiple secondary characters are introduced one after the other, while the new-look Anime on Demand's subtitles only serve to make things even more messy as these captions are piled at the bottom of the screen.

If you can keep up with the character roster for each arc or segment of the story as it progresses however, Un-Go is a hugely satisfying viewing experience - it delivers smart, snappy and intelligent stories in a confident fashion that doesn't (aside from one annoying and pointless battle scene in the final episode) rely upon flashy visuals or trickery to keep its audience enraptured.  Indeed, much of its animation can be labelled as functional rather than anything more substantial, and its soundtrack is largely minimal but all the more effective because of it.

It might not quite push into a list of the greatest anime to come out of Japan in 2011, if only for the fact that it's been an impressive year for good shows, but Un-Go is a series well worth watching for anyone on the lookout for intelligent viewing fare.  Persevere beyond a slightly slow start, and that initial promise is realised admirably.  We'd be looking forward to seeing the show's physical release via Kaze UK, that's for sure.

You can currently watch Un-Go in streaming form via Anime on Demand.

8
It isn't visually stunning and it can occasionally demanding, but beyond that Un-Go is an intelligent and fascinating series rife with thoughtful commentary on society and the nature of truth.
LATEST REVIEWS