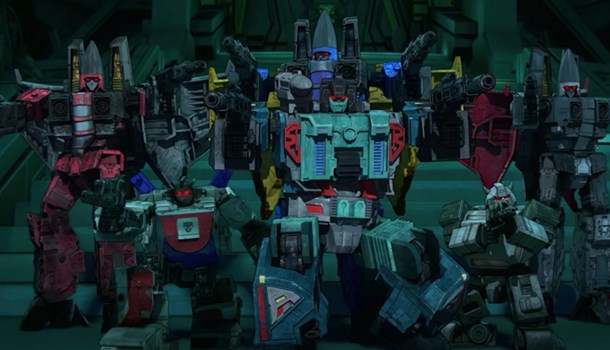 We join the series in the aftermath of Optimus Prime’s actions last season, sending the Allspark through Cybertron’s last spacebridge to foil Megatron’s ambitions, and the subsequent disappearance of the Ark carrying himself and most of his surviving Autobots through the same portal, the planet’s energy problems have accelerated.

Megatron’s Decepticons find themselves forced into taking increasingly drastic measures to secure a way off their dying world, all while Elita-1 and her small band of remaining Autobots stand as the last defenders of the planet. Meanwhile in deep space, a shadowy band of Mercenaries have found the Ark, adrift in space...

Transformers War for Cybertron: Earthrise is the second part of Netflix & Rooster Teeth’s “Original Anime” tying into Hasbro’s ongoing War for Cybertron toyline (Siege/ Earthrise/ Kingdom), and the whole series dropped on Netflix on the 30th of December 2020. As with Siege before it, Earthrise is comprised of six 25 minute episodes.

Ok, to fully articulate my thoughts on this I need to delve deep and reference not just Earthrise, so SPOILERS for 35+ years of combined Transformers lore.

Right. Let’s get into it.

Firstly, is Earthrise any good? Sadly I have to say not really. It does have it’s moments, and two in particular made me squee like the Transformers mark that I am (more to follow on those), but the overall execution is just lacking, for want of a better word.

Visually, the show is drab on drab (with and extra dash of drab), with everything in muted tones and a thick layer of smog over any scenes on Cybertron, with the majority of the rest of the series just layered in shadow. And the fact that this was probably a monetary decision is highlighted by the fact that most of the characters we see are recolours of existing character models, some of which don’t even get the modified head of their toy (looking at you Exhaust). Of the five new character designs we see in this series, only one even transforms. It’s frustrating because Rooster Teeth are normally a good shout for vibrant animation experiences (see RWBY, Red Vs Blue & Gen:Lock). The action at least remains well thought out and cleanly executed, if a tad stilted.

Audio is a bit of a niggle, as so many of the characters just mumble, but Optimus Prime & Megatron are the worst offenders, which is a shame as Prime VO Jake Foushee has been killing it as Prime in Cyberverse & Rescue Robots series, whilst Meg’s VO Jason Marnocha cuts loose later in the season when he gets to voice Galvatron (a performance I would have sworn was veteran VO – and Beast Wars alum - Richard Newman). Special shout out though to the voices of Quintesson Deeseus, who are wonderfully unsettling.

The story is, however,  where I have the biggest issues. At this point we are 2/3’s of the way into the War for Cybertron Trilogy. 12 episodes. Near as makes no difference 6 hours viewing time. You know where that has gotten us? The same place the very first episode of Generation One – Arrival from Cybertron, Part 1 – got us to in the first 15 minutes. Seriously. From Wheeljack & Bumblebee scrounging for Energon on Cybertron, to The Ark & Nemesis crashing on prehistoric Earth. The original cartoon even gave us ‘Bee & ‘Jack using their funky Cybertronian alt modes. 12 episodes in and we’ve STILL not seen either one transform. I get one of WFC’s selling points is the animators use of the actual toy models for the animation, but it’s approaching parody and highlights a major issue of the narrative, that we’ve characters who clearly have modern Terran vehicles as their alternate forms, but they can’t have them transform into them as we’ve not actually been to modern-day Earth yet. And lest we forget, the franchise is called Transformers.

Now I don’t want to come across as mister negative as I can appreciate what they are trying for – the show has made a point of exploring how both Autobot and Decepticon are exhausted by their war, and how desperate they are getting. A particular highlight of the series is Elita-1 and her small band of Autobots who stayed on Cybertron finding that Megatron is turning on his own troops for resources, and pockets of those Decepticons are now joining her. The show is also very good at laying nuggets for fans – the aforementioned appearance of Galvatron is a real “did they just do that?” moment and the idea of him trying to guide Megatron to avoid becoming him to foil Unicron’s plans is a nice callback to classic stories like Target: 2006. When Galvatron offers a familiar golden disk (from Beast Wars) it was only topped by the appearance of a VERY familiar-looking velociraptor in the closing moments of the last episode. We’ll see if War for Cybertron can at least stick the landing in Kingdom, but for now it remains muddled, elongated and features a cast that doesn't even live up to their namesake. It's frustrating.

6
Not really a show for those new to the franchise, but short enough that watching it is at least not wasting too much of your time.