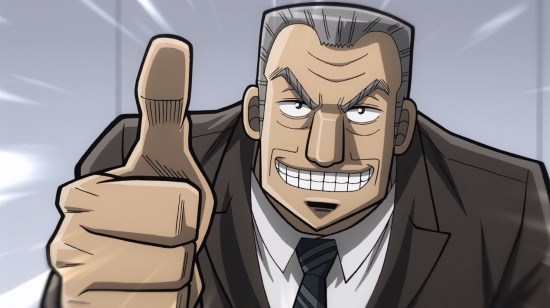 Yukio Tonegawa is a busy man. He’s the second-in-command of the Teiai Corporation, a company run by the sadistic Kazutaka Hyoudou, so he is accustomed to catering to every whim of his geriatric superior and directing his dirty work with apparent ease and lack of remorse. When Hyoudou tasks Tonegawa with designing a new “game” to inflict on the hapless souls who have fallen foul of the Corporation however, the long-suffering manager may be facing the toughest challenge of his career.

If you’re aware of Gambling Apocalypse Kaiji (if not, I’ve clearly not been trying hard enough…) you may remember Tonegawa as the confident, smartly dressed right-hand-man to the show’s crazed main antagonist, and if you’ve seen all the episodes screened to date, you may also be aware of Tonegawa’s fall from grace. This series is his story, apparently showing the events leading up to his run-in with Kaiji from the perspective of him and his henchmen before that tenacious down-and-out threw their plans into disarray. What is surprising though is that, in comparison with the original seasons of the Kaiji adaptation, the Tonegawa-centric spin-off is a very different animal.

In terms of visuals and general presentation, it’s all pretty much the same: the distinctive character designs, the production values, the gloriously over-enthusiastic narration (not delivered by Fumihiko Takichi this time, sadly) and even the wonderful murmurs of “zawa…zawa…” when a particularly suspenseful moment is taking place are all very familiar. The subject matter however is completely different, to the point where it almost feels like a parody of its predecessor.

Beneath the superficial similarities, this is not the suspenseful psychological thriller in which a man at rock bottom is trying to overcome enormous adversity; Tonegawa is respected, successful and the challenges he faces are nothing like those that Kaiji has to endure. While Kaiji stands to lose literally his life at points, the worst fate that could befall Tonegawa at this stage is likely to be a bad appraisal and possible demotion. Whether this is the intent of the show’s writers or not I’m unsure, but using the classic “Kaiji TV adaptation” look and feel is rather jarring at first. If you are after a tense gambling drama, Kakegurui is probably closer in terms of content and pacing; Mr Tonegawa is clearly a more comedic spin-off that requires knowledge of its predecessor to fully appreciate (that said, both this and all the existing seasons of Kaiji are available on Crunchyroll, so you can catch up if you want to).

Once you have accepted that fact, Mr. Tonegawa is still an entertaining portrait of the corporate world, ramping up the absurdities and livening up the drudgery of workplace management life with its trademark quirks. There’s something delightfully incongruous about a typical office brainstorming session that’s delivered with breathless enthusiasm and focused on the life-or-death contests of the Kaiji universe, and in some ways the unsympathetic nature of Tonegawa’s character makes it easier to endure his moments of exasperation and anxiety. A personal highlight for me came in the third episode, in which a “team-building” exercise would have failed, had Tonegawa not come up with an innovative IDEA (the narrator’s emphasis, not mine!) to ensure that his meat-and-booze barbeque went ahead successfully. The solution was ingenious for sure, but cruelly ironic given the context in which the piece of equipment in question appeared in the original story.

Whether this line of comedy will wear thin over a longer episode run or whether it can succeed on its own merits instead of call-backs to the original Kaiji remains to be seen, but if Tonegawa is given some genuinely challenging tasks or if a memorable character appears amongst his henchmen, it can probably go the distance.

Ultimately, you really need to be mindful of the fact that this isn’t the third season of Kaiji that fans were hoping for, and that it’s trying to accomplish different things. I suspect that “yes, but what about the gruff middle-aged guy who works for the bad guy?” was a question that few of us were asking, but now they’ve given us the answer we may as well find out. Zawa zawa indeed.