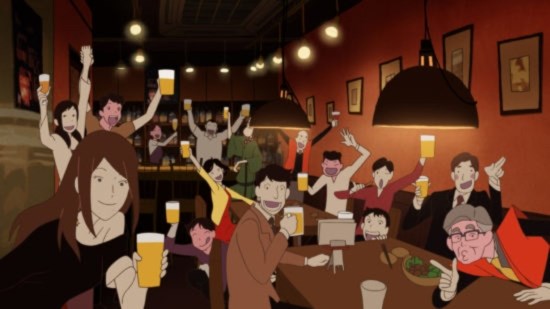 The Night is Short, Walk On Girl (Collector's Edition)

If you appreciate the more experimental side of the anime industry and are keen on directors and studios who dare to “do different”, Masaaki Yuasa has probably been on your radar for a while. In recent years his unique art style and uncompromising storytelling style that borders on the downright challenging (after watching Mind Game twice, I’m still not sure I understand it…) have yielded some cult classics. Around the same time that Lu Over the Wall delighted audiences with its Ghibli-esque tale of a lonely teenager befriending a yokai mermaid, The Night is Short, Walk on Girl delivered in a very different, but no less dizzying way.

Over the course of one night on the streets of Kyoto, a lovestruck student attempts to attract the attention of an acquaintance who is unfortunately oblivious to his hesitant advances and instead embarks fearlessly on a dreamlike, drink-fuelled journey, causing them both to cross paths with guerrilla theatre troupes, pop-up book fairs and an eccentric assortment of magical beings who are out for the seemingly ordinary night out on the town.

For the most part, it's a delirious delight: it's atmospheric, unpredictable and carries that same surreal sense of being too drunk to hold on to your inhibitions, yet still sober enough to enjoy your surroundings. By my reckoning (I sat down with a pen and paper to count them, so you don’t have to) our heroine puts away somewhere between twenty-one and twenty-eight drinks during the course of the film, depending on whether you include an unfinished glass of champagne and the bottles of wine sitting half out of shot. Suffice to say that a “Withnail and I”-style drink-along game is not something I’d recommend you try at home for this one… (UKA accepts no liability for any liver damage incurred should you choose to attempt it - Ed)

As is often the case with stand-alone movies, the characters they meet along the way are memorable and fascinating to the point where you wish that there was more running time to get to know them better. After all: who wouldn’t want to learn the origins of the Sophist Dance, or spend a few extra minutes at the second-hand book market that’s open at 2am? Although there are strong stylistic similarities to The Tatami Galaxy – which also shares the same creator, the novelist Tomihiko Morimi – their characters and storyline are not directly connected, so you can pour yourself a cold one and enjoy this without any prior knowledge, or having to contend with an “information overload” from the latter's infamous rapid-fire dialogue and accompanying subtitles.

The later portion of the film in some ways undoes the magic of the spellbinding earlier segments, getting bogged down with Senpai’s drawn-out fever dream monologues when the colourful supporting cast are left behind. The sad truth is, he belongs to the all-too-familiar self-pitying anime male lead mould, which makes him a bit of a weak link given his central role. He's certainly nowhere near as fun to watch as the vivacious (if somewhat flighty) Otome and the other oddballs they met earlier in the film, so you might find yourself getting impatient for the final stretch to work itself to the conclusion. Fortunately the final scene does, without giving too much away, deliver a very sweet, believable and refreshingly satisfying ending that romantic comedy anime stories rarely seem to achieve.

Personally, this movie resonated with me on two levels: on one, it vividly brings the warm, humid picturesque and timeless Kyoto evening to life, with its hidden sights and inviting bars and restaurants; on another, it reminds me of certain moments of my own student days, when you often meet colourful characters while in a state of wide-eyed inebriation (and somehow, miraculously, have fun without coming to any serious harm). Mash together then your favourite holiday memories with the most mind-bending student night out ever, and you will have a general idea of the atmosphere of this movie.

Although it was originally released around the same time as the more family-friendly and possibly more accessible Lu Over the Wall, Night is Short... has I think more of a niche appeal: the setting and themes will resonate more with students and other young adults. The meandering plot certainly isn’t aimless but the little tangents, chance encounters and the hallucinogenic final arc might not work so well for viewers who are after a more concise and structured storyline. The message here seems to be more about the journey than the destination, encouraging you to enjoy the moment, listen and learn from the opportunities that come your way, and above all nurture the connections with others. The take-away from this for me is that we’re all connected, and our lives are richer for it.

The Collector’s Edition is also worthy of special attention, mainly for the enclosed artbook. While this is a common special feature these days, and a particularly welcome one when the production is as vibrant as this, it’s unusual for it to be in hardback. This makes it feel a little extra special, with an extra layer of solid quality. As you’d expect, it includes a selection of character sketches and background artwork from the film, but also includes a few pages of written commentary from Andrew Osmond. These give some additional fan analysis that is witty and well-researched, and provides background information to heighten your appreciation of the film.

A selection of trailers, a video interview with the director, and a 52-page artbook

8
A wondrous and fun, if drunken and meandering, journey.
LATEST REVIEWS