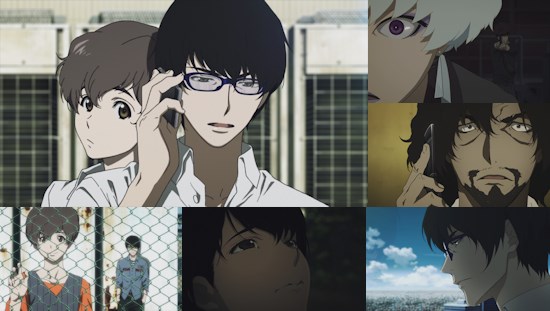 For any nuclear capable nation, it is the nightmare scenario that doesn't even bear consideration - the prospect of terrorists using said country's facilities to get hold of materials that could be used to create some kind of nuclear weapon. It's exactly this scenario that we face within minutes of the opening to Terror in Resonance, as two young men launch an audacious assault on a nuclear fuel reprocessing plant before making off with what is believed to be a substantial quantity of plutonium.

This, as it turns out, is only the start of the reign of terror carried out by this duo who publicly go by the name of Sphinx, as they set about using social media to threaten attacks that they then act out with a chilling degree of intelligence and preparedness. Just who are Sphinx and what do they want? This is a question that public, police and government alone want the answer to, and as the duo lay out highbrow clues to those seeking to bring them to justice it's a disgraced former detective named Shibazaki who comes to the fore as the one man who may be able to solve their riddles and track them down.

Into the midst of this cat and mouse game stumbles a proverbial lamb to the slaughter in the form of Lisa Mishima, a bullied loner with family troubles who somehow finds herself mired in the midst of Sphinx's dangerous games with no means of escape and little in the way of common sense. As if that wasn't enough, more fuel is about to be added to the fire as a figure from the havoc-wreaking duos past also comes out to play - there's now a lion involved in this cat and mouse game too, as the stakes rise ever higher.

As opening episodes go, Terror in Resonance starts spectacularly - we begin with a raid on that aforementioned nuclear plant, end with untold destruction, and every second in-between is packed with tension, atmosphere, character and some truly masterful direction from Shinichiro Watanabe that will keep your eyes glued to the screen in rapt attention for every single second. These are all features that stand the series in good stead for most of its eleven episodes - the way events are presented is never anything less than compelling, and the increasingly complicated and dangerous game of chess played between Sphinx, police and other interested parties keeps this tense thriller on a rolling boil from start to finish.

The show is also a masterpiece visually, eschewing the wild colours and caricatures of many anime series to instead aim for realism in everything that it does, both in terms of the world it presents (YouTube, TOR and Amazon are made use of within an unerringly accurate rendition of locations in Tokyo) and the way it presents it. The movement, facial expressions and colour palette of the show add an extra layer to its feeling as something tangible and believable, and quite frankly production studio MAPPA do an outstanding job here that is rarely anything other than absolutely top notch. No matter what other criticisms you might wish to level at it, this is a stunning work to look at that is arguably a must-watch on this level alone, especially on Blu-ray where you can wallow in its spine-tingling attention to detail.

Praise must also be levelled at the soundtrack to Terror in Resonance. This goes without saying perhaps - it is a Yoko Kanno soundtrack after all, but even by her standards it's a smart, considered and eclectic treat that seamlessly shifts its influences from The Beach Boys to Boards of Canada without missing a beat. It's a perfect accompaniment to the on-screen mood and tone of the series at all times, and it's another masterpiece in Kanno's oeuvre.

So, with so much glowing praise, we're looking at a perfect ten score for the series, right? Well, no - you see, Terror in Resonance does have some glaring issues beneath that visual polish and the sheen of its direction and atmosphere. Foremost amongst them is Lisa's character - I call her a character, but she might as well be a block of wood with the words "PLOT DEVICE" etched upon her, for that's all she is. There's no real character here as such, and certainly no real development of that character - she is simply a girl to which things happen whenever the plot demands it so that the story can be driven forward. In an alternate reality, you can imagine a fascinating arc as Lisa comes to terms with her situation, both past and present, but sadly in our reality she's largely an unfortunate waste of space.

The other major problem here is that Terror in Resonance doesn't really live up to the grandiose theatre of its story - it's a tale that feels like it has much to impart upon the viewer to provoke thought or discussion, but ultimately either doesn't find the time or the words to say it and leaves us feeling empty. The closest the series has to a message is a clear statement of distrust in the elements of society that should be protecting and serving us, but that simply isn't enough to my mind. What does Watanabe think of this state of affairs? How should it be fixed? What should we be thinking about if we want to make a difference here and now, in our own reality? The climax to the series in particular feels like a politician with a reputation as a grandiose orator coming to the stage, repeating a stock slogan then dropping the mic and walking away, leaving us puzzled and disappointed.

Finally, it should be noted that for all of its realistic trappings, a certain suspension of disbelief is required here - sit down and try to unpick the politics of those seeking to stop Sphinx in the second half of the series and you'll end up baffled as it makes very little sense, particularly in terms of the actions certain parties take to achieve their goals. It's here where that sheen of realism actually spins into a negative for the series - in a cartoon world it would be easy to take these actions at face value, but in our recognisable city filled with sights and mechanisms we all know ourselves it's tough to hand-wave things away so simply.

In balance though, none of these negatives entirely damage what the show does well, and provided you're willing to put your rationality to one side and enjoy the series as a tense thriller then you'll be richly rewarded. Watching Terror in Resonance is an experience - sometimes an experience which invokes the terror of the title as events hit uncomfortably close to home, sometimes as an exciting detective story, sometimes simply as a high octane action movie with delusions of grandeur. It's hard to tear yourself away from its potent mix of great animation, incredible music and breathless narrative, and it's a rollercoaster ride worth taking the time to enjoy.

As you might expect, there's little to fault with the Japanese voice cast's performances across the series (although some of the attempts at English later in the series are a little clumsy), and thankfully the English cast also deserve praise for a job well done. Admittedly both member of Sphinx sound a little older than they perhaps should, but that's a difficult issue to cast around in all honesty and the performance themselves are suitably strong across the board. That aside, we have no issues with the Blu-ray side of this Ultimate Edition package - subtitles are clear and effectively fault-free, video quality is strong and audio quality likewise, meaning there's nothing to spoil your enjoyment of the show.

Speaking of the broader physical package for Terror in Resonance, this Ultimate Editioin from Anime Limited is undoubtedly an example of their efforts at their best. Outwardly it looks the part with great artwork and presentation, and alongside the Blu-ray and DVD discs themselves the included artbook is genuinely a great addition to the overall experience of owning and viewing the series. As you can probably intuit from this review, this is exacty the kind of series where any opportunity to gain some insight into the creative process is valuable, and the included interviews with numerous key members of staff on the series is a great addition, while all of the included background and character art is highly enjoyable to look at and excellently presented to showcase the visual fruits of MAPPA's labour.

When it comes to that all-important question of "Should I watch this series?" my answer is an unequivocal "It's very good so yes you should, but..." There are caveats and small print to be tied into recommending this series that is for certain, but personally I'd argue that none of them are fundamentally damaging enough to the show's efficacy to make it anything other than a series that you should check out for yourselves. If nothing else, it's further evidence of the strength and versatility of Shinichiro Watanabe as a director, the power of his partnership with Yoko Kanno (and the oft-forgotten importance of incidental music for that matter), and the ability of anime to be more than "just a cartoon". It may not have the intelligence or the message it perhaps believes itself to be capable of conveying, but that doesn't stop Terror in Resonance from being an exceptionally engaging thriller.

English 5.1 and Japanese stereo DTS-HD Master Audio with English subtitles. On-disc extras consist of US cast commentaries for episodes 1 and 11, "In-depth conversation with the cast" feature, text-free opening and ending credits and trailers.

8
Its execution is sometimes flawed and its message mangled, but as a highly entertaining and engaging thriller Terror in Resonance is very good indeed.
LATEST REVIEWS