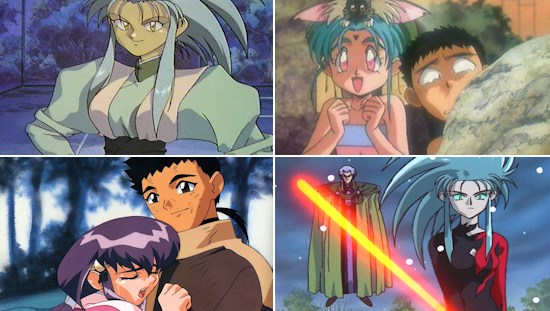 It all starts when Tenchi disobeys his Grandfather and investigates his family's secret cave, where it's said a monster sleeps. After a bit of falling over, Tenchi finds what appears to be a mummy, and accidentally awakens it! However, when it finally catches up with him after school, the Mummy turns out to be a beautiful young woman named Ryoko, a space pirate imprisoned in the cave by Tenchi's ancestor, Yosho. With said ancestor long gone, Tenchi becomes a legitimate target, and she starts chasing him around school. However, even when Tenchi barely survives the encounter, a ship is on its way to Earth, intent on capturing Ryoko and punishing her allies...

So begins Tenchi Muyo, and these first 3 OAV's are undoubtedly the best. The tale of one man being pursued by many alien babes is nothing new - Urusei Yatsura was doing it years ago, but Tenchi Muyo is just so charming and blends all the right elements so seamlessly that it reatains the X factor and manages to stay with you long after you've watched it.

The wealth of characters help to add depth to the Tenchi Universe too, and everyone will have a favourite, whether it's bad-girl Ryoko, the poster girl for cuteness Sasami, her elder sister Ayeka, mad scientist Washu or the wonderfully OTT villain Kagato, there's a character to suit all tastes and the series is all the better for it.

The animation is solid, the music is wonderfully atmospheric (especially the opener) and the dub is great! All the voice actors really seem to relish their roles, especially after the first two episodes. Real effort has gone into giving each of the characters a distinctive voice, and it adds a real feeling of atmosphere to the whole production, and as such became the first anime where I preferrred the dub to the sub.

To sum up, if you're an anime fan and you haven't got this, you're missing out - go get it!