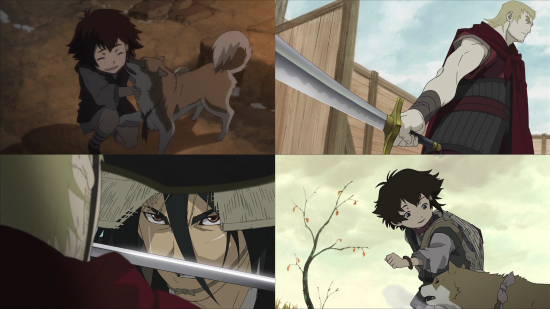 Sword of the Stranger Collector's Edition

Eight years ago we were treated to the first release of Sword of the Stranger. This initial release was one of the earlier Blu-ray and DVD combination packs and this was way back when Beez were still releasing in the UK. Remember those days?

Sword of the Stranger was also a feature which managed to get a cinema release and was one of the highlights of that year’s Leeds International Film Festival, which is where I first saw it.

My first impressions of the film were incredibly positive back in the day. I recall being impressed by the slick fighting sequences between the Ming Dynasty super-soldiers, the forces of the Shogunate, and our lone swordsman - later called Nanashi. I found myself applauding the antics of perhaps the best dog in anime, Tobimaru, as he repeatedly saves his somewhat nieve young master, Kotaro, from his own stupidity. I found myself highly amused by the bickering between Nanashi and Kotaro as they negotiate a protection contract to ensure that Kotaro doesn’t end up a sacrifice for the production of a Chinese magical potion.

No spoilers, but given that the pair are up against an army of skilled assassins, all without the ability to feel pain thanks to their Chinese medicine, they are pretty much stuffed. And, after a chase across half of Japan, our protagonists, and the best dog in anime, find themselves split, betrayed, and captured. Leaving the door open for the grand finale, which offers its own twists and turns.

Sword of the Stranger is a very slick production and having recently seen Blade of the Immortal by Takeshi Miike, this production by Studio Bones’ Ando Masahiro can certainly hold its own in the period action thriller genre. With its fluid bouts of extreme swordplay and its truly gory outcomes. I do enjoy a good fight which ends in one of the combatants reviving the Black Knight scene from Monty Python and the Holy Grail.

There were times during this film where I found myself on the edge of my seat, waiting to see the eventual outcome. And with the three sides, Chinese Ming Dynasty, the Shogunate, Kotaro and his bodyguard, there is never a dull moment to be had through this nearly two hour feature. While the fight scenes are brutal and gory, these fight scenes, at least for me, aren’t difficult to enjoy. They are compelling. Absorptive. Addictive. So much so that when one of the weapons of the Ming Dynasty appears within the film, gunpowder, it reduces the fight to such a blasé affair, that I felt disappointed. And yes, while I appreciate that the death of the Samurai was due to the rise of gunpowder based weapons, I had secretly hoped that the historical inaccuracy had continued a bit longer. If only to get a nicer ending, but hey, we can’t get what we want all of the time.

While not wishing to repeat my predecessor’s review from the original Beez release; I shall say only that, while this is a fast-paced thrill-ride of a feature, there is also a lighter and more emotional side. Kotaro and his past are both tragic, and humerous. The child and his four legged companion are the perfect team. Hell, just look at them steal food! The antics of Kotaro and Tobimaru, and the banter between these two and their bodyguard, provides nearly all of the laughs and light hearted moments in the film. It is definitely one of the rare occasions when having a child in the film actually improves the story.

Technically, I can’t comment on the comparison to the previous Beez release. While I suspect that this re-release is exactly that, a reboxing of the old master DVD and bluray discs, I can’t confirm this. What I can confirm is that the bluray is crisp, clean, and well produced. With none of the poor menu design that historically impacted Beez bluray releases. The English dub is well acted and fun. While I have previously enjoyed the Japanese dub, I believe that in this case the English dub is an improvement.

Sword of the Stranger was one of those films which always seemed to be a “must own”, yet I personally never got around to it. Why? I have no idea. However, thanks to Anime Limited’s efforts I can finally own this film for myself. It is safe to say that if you are a fan of incredibly well produced sword swinging action films, then Sword of the Stranger is a must have. While its story is a bit weak at times, this is countered by the well choreographed action and gore. It's bloody great fun and a film which deserves it's classic status.