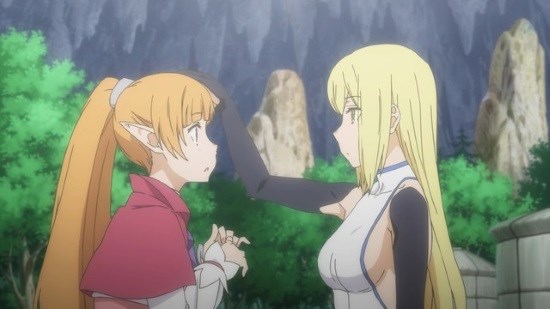 Spin-offs are tricky buggers to do well. After all, if you aren’t careful you run a big risk of alienating the core audience of the original show by not continuing the main story. You could choose also the wrong characters too! After all who wants to watch say, an Evangelion Spin-off that focuses on Pen-Pen? Err, OK, bad example. On Hikari? No Toji, no Ritsuko. Alright so there are no bad Eva characters to do a spin-off about but lots of other shows do. Which, eventually, has brought us around back to the subject in hand – the spin-off of Is It Wrong to Try to Pick Up Girls in a Dungeon? As Spin-off’s go Sword Oratoria certainly has some weight behind it – it has a staggering 10 light novels behind it (the main series has 13 at time of writing) and started just a year after the series from which is spawned! So, time to head back down into the dungeon of Orario – let’s explore these dungeons together!

The Loki Familia is one of the most powerful clans in the city. They regularly send expeditions of their most powerful members deep into the dungeon long past the point where other groups have to give up. One of the Familia’s mightiest warriors, the swords-woman Ais Wallenstein, is always dashing into the thick of the fray, honing and sharpening her skills like a woman possessed whilst her comrades look on with awe and, in the case of Lefiya, adoration. After a raid into the dungeon goes wrong following an attack by a deadly new variety of monster, the Loki Familia retreats to the surface only to accidentally chase high level minotaurs into the upper levels of the dungeon. Clearing out these beasts before any harm can come to the lower level adventurers brings Ais into contact with a certain familiar adventurer and becomes the first incident in a series that will start to reveal some of the darker secrets of the dungeon and the gods who surround it.

Sword Oratoria is a show of two halves. Well, maybe that's not fair. Call it a two thirds-one third split. The main part of the story is absolutely fantastic. Ais and the other members of the Loki Familia are fantastic characters who keep the world really vibrant and engaging whether it’s through the likes of the squabbling sisters Tione and Tiona or just the antics of Loki herself (you wouldn’t catch Tom Hiddleston behaving like this!) Ais herself is initially a bit of a blank canvas but as the series goes on she starts to come out of her shell a bit and the relationship between her and elven sorcerer Lefiya is the heart and soul of the show. Whilst they are perhaps a little over powered to generate much in the way of tension as the story progresses, the action is really fun to watch and the interplay between everyone really keeps things going. This is after all a story about the characters and not really the monster-fighting action.

Where things fall down, ironically enough, is when Sword Oratoria crosses over with the events of the main series (timeline-wise the two series take place pretty much side-by side). You see, Sword Oratoria has joined the elite group of spin-offs that include shows like A Certain Scientific Railgun – spin-offs that are vastly better than their originators. Watching the Loki Familia is so much fun and so engaging that whenever the series brings in Bell and his busty blue-ribboned goddess things just slow down to a crawl as you drum your fingers waiting for the fun to start again. It really shows up just how dull Bell was in the original show and how great all the characters here are! Plus whilst Ais certainly never comes across with having any feelings than curiosity towards Bell, you can’t help but get angry at her for failing to notice how much she’s upsetting the adorable Lefiya!

You also can’t help but notice the rushed ending which never really resolves the plot threads that were building up to it without thinking about how much more time they could have spent on it had the excised all the Bell-centric moments.

On the technical side nothing really stands out too much here. The visuals are very clean and the animations nice but there's also clearly never been the budget to do anything truly fancy. The music is serviceable but largely unnoticeable other than the opening and ending credit songs which are surprisingly gentle, pleasant slower-paced pieces rather than the heavy and fast J-Pop you might have been expecting from a show like this. You’ll likely want to stick to the Japanese dub here as it’s by far the superior option with Juri Kimura (Beloved by us all for her role as Aoi Miyamori in Shirobako) doing the heavy lifting here as Lefiya whilst Saori Onishi reprises the stoic, almost dead-pan Ais.

Whilst this is a spin-off series, were it not for the cross over moments with the original series Is It Wrong to Try to Pick Up Girls in a Dungeon, this would be a great show even for new viewers (then again someone with no knowledge of the original might never notice them at all). For veterans of the franchise this is a definite must-have as it’s really a showing of the best this world has to offer. The crossovers are annoying and unnecessary in my opinion, but they thankfully don’t spoil the show too much and there's a lot of fun to be had here with the Loki Familia!