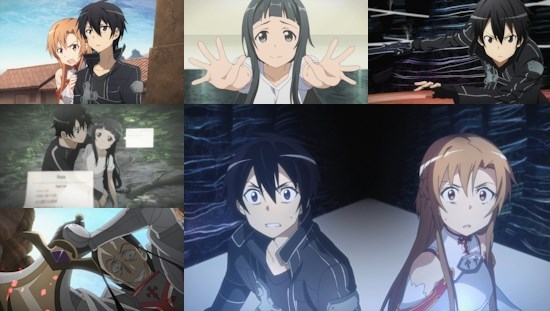 Its two years after Sword Art Online trapped its players within the confines of its deadly game, and as you might expect the results have been brutal, with Aincrad's populace decimated and effectively split in two. While some have chosen to live out this virtual existence in peace rather than risk their lives to conquer it and escape, others continue on the front lines, fighting their way through floor after floor of the game's dungeon and inching their way towards its hundredth and final level.

Even after all of this time, our protagonist within this world Kirito continues to go it alone as a solo player, using his carefully honed skills to full advantage. No player can hope to do everything alone however, and Kirito's discovery of a particularly rare creature that is ripe for cooking sets the scene for events to come as he turns to Asuna - Sword Art Online's answer to Nigella Lawson, but without the drug use - and her culinary skills to make the most of his catch.

It's really the burgeoning relationship between these two characters that dominates this second volume of Sword Art Online and the events that occur within it - the two grow closer and closer after choosing to form a party together, which in turn causes friction with Asuna's guild, who are far from keen to lose their vice-commander and such a talented combatant. Ultimately, one unusual discovery in particular offers us a glimpse behind the proverbial curtain behind which the game's mechanics are veiled, and it's this which in turn leads to events which could finally bring the nightmare of being trapped within a virtual reality to an end.

Much of our love for the first volume of Sword Art Online revolved around its sharp sense of world-building, which did a fantastic job of employing typical MMORPG concepts and strategies into Aincrad's virtual world. There's certainly a continuation of that here in places right the way through to a massive twist that ultimately brings the first half of the series to an end, but at the same time its efforts to reach that point also bring some questionable decisions which threaten to derail the show's early momentum.

In particular, Yui's introduction and the story arc surrounding her feels like a forced and ham-fisted way of leading in to future events, and this isn't helped by the shift in focus away from the front line of battling through the game's dungeons in deference to concentrating on Kirito and Asuna's relationship. In fairness to these episodes, the way it builds and employs this relationship works well for the most part, in particular in managing to juggle Asuna's fighting abilities against her more feminine side, but it can't be denied that this simply isn't as interesting as the struggle to beat Sword Art Online itself.

If it's occasionally a slog to reach the end of this first half of the series (and to call it a slog would be harsh, even at its lowest ebb it remains reasonably entertaining), if all feels worthwhile for that aforementioned final twist in the tale, which is delivered superbly out of nowhere to catch the viewer unawares. It's a shame that some of the fallout from this pivotal moment is poorly executed - a suggestion that Sword Art Online's entire existence is some kind of swiftly forgotten whim is a lazy get-out in a moment that should underpin the entire series, but is instead met with a shrug. That aside, it's largely a satisfying way to end the series at this point before moving on to its second half.

One area where Sword Art Online continues to impress is in its animation quality - its action scenes continue to be well-paced and great to look at (another reason why we lament there being less of them in this volume), and even away from battle the overall aesthetic of the show is very pleasing indeed, particularly on this UK Blu-Ray release which certainly looks the part. Both English and Japanese voice casts do a good job of delivering what is required of them throughout, although we still prefer the latter simply on account of Asuna's character feeling a little better represented in the original language track.

As per part one, we're sad to confirm that this second volume of Sword Art Online also features no chapter markers, making it impossible to skip through sections of an episode (such as skipping the opening credits) as you can only move between episodes themselves. On top of this, there also an issue with the Sword Art Offline web extras included with this disc that has completely skewed the pitch of its audio dialogue - if you've ever wondered what Asuna would sound like if she was an elderly granny who speaks really slowly, this might inadvertently be the release for you, but otherwise it's another disappointing error on what is otherwise one of Manga Entertainment's current tent pole releases.

Thankfully, neither of these issues fundamentally ruin what is otherwise another entertaining batch of episodes - it may lose a little of that early sheen which comes from those early forays into Sword Art Online, but its over-arching story is still engaging and presented in a way that is eminently satisfying. It's a high bar for the second half of the series to follow, but we won't have to wait for long to see whether it's a bar that the third volume can leap over or crash into at full speed.

7
Some of its plot points threaten to derail the show's hard work in building its world, but much of its final payoff is entertaining enough to justify its overall direction.
LATEST REVIEWS