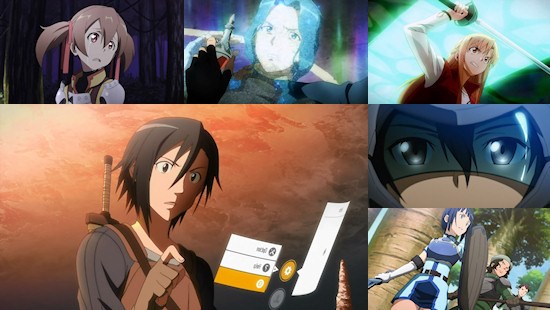 After feeling very disappointed by the summer anime season line-up, I thought all hope was lost and that I'd finally get a chance to watch those show I'd fallen behind on.  But, there was one show amidst everything else that had the potential to appeal to me. That gem was Sword Art Online.

Based on a light novel of the same name, Sword Art Online is set in a world not too far from our own give or take a decade. Video games are king, MMORPGs are as successful as ever and are the first games to fly off the shelves; none so much so as the highly anticipated VRMMORPG 'Sword Art Online.' The game adopts virtual reality helmets to send the player into a vivid world where everything is 'real' and interactive.  Only 10,000 copies of the game are released, all of which are already pre-ordered and in high demand. It's day one of the game's release and just like all self respecting gamers those who have bought the title want to get into the game and start playing right away. This desire to play is all part of the game developers evil plan... no, not to have a group of addictive gamers all playing and paying their monthly subscription fees; there's actually something a little more sinister at work.

When beta tester Kirito and the rest of the game's players all gather in thevirtual town centre for its opening event, they are greeted by the developer of Sword Art Online who informs all ten thousand participants that they can't leave the game until they reach the top of the tower. To make things worse, if they die in-game they also die in the real world. If things couldn't get any worse, they will also die if an outsider removes the virtual reality headset from the player.  Okay okay, I know this premise is far from new so I'm not even going to try and defend it, but with that said there's something about games that centre around an MMORPG whether it's people stuck within a game or an anime in an MMO style universe that has plenty of potential, so I'm probably a little more open minded than most with this otherwise regurgitated plot.

I had a lot of worries for this show even before it began airing. I wanted it to be great but felt it couldn't deliver to my high expectations as I expected so much from it. My main expectation was for the series to deliver a sense of 'risk'; I wanted a level of threat and fear running throughout the show, and a feeling of worry for a character's well-being. It probably sounds like a sadistic thing to desire from the show, but let's be serious who wants to watch a show where you know everyone will survive? It would totally make the threat of the antagonist within this series redundant. With that said, there are two things can achieve this sense of threat; making characters good enough that you actually care for them, and perhaps more importantly not being afraid to kill off a character here and there just to keep the threat real. Without giving too much away, it appears this show actually has the guts to kill a character off, thank goodness!

Even after a few episodes of watching Sword Art Online I can already see a growth to Kirito's character as he reveals a little more about his own past. I can only hope this continues to happen as the series progresses. It's also interesting how the show explores human nature; how people can turn on one another for their own gain.

I really like the overall look of the show - it's colourful when it needs to be. The style of the characters themselves don't do anything new, with the series obviously playing up to the regular RPG style clichés of the little shy girl being a healer and so on, although I suppose that's to be expected. As a whole however, I'm thankful that the show isn't as predictable as some may have originally thought, although admittedly it seems to run through a rather typical formula, as least from what I've seen thus far. It's all a little too early to say how the show will end up, but providing they manage to keep up with the excitement that I've experienced so far watching this show I'll certainly be sticking this out until the end.

7
If you've played an MMO at some point in your lifetime then give this a go. Don't be quick to judge the show's plot as a 'been there, done that' effort, go in open-minded and you will be rewarded.
LATEST REVIEWS