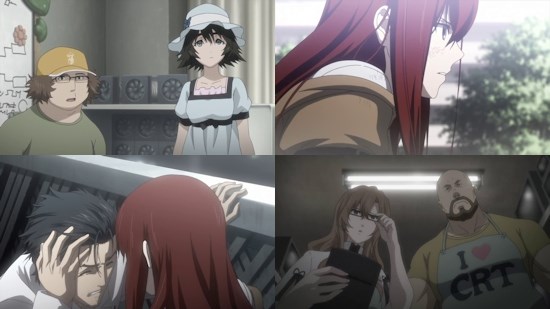 I think it's fair to say that Steins;Gate has quickly established itself as a firm favourite both here at UK Anime and for our readers - little surprise then that the first UK screening of its theatrical movie outing generating a huge amount of buzz at this year's Scotland Loves Anime in Edinburgh. Given the success of its TV offering however, this is a film with a lot to live up to.

Set one year after the events which closed out the TV series, Loading Area of Déjà vu sees us return to see what the cast are up to in their idyllic timeline freed from any death or pending future apocalypse - as you might expect, enjoying a fun and fulfilling life is the order of the day for the members of the Future Gadget Lab as they experiment with their latest ludicrous invention and generally goof around. With the return of Kurisu Makise to Japan from her usual American home for a conference, the gang is well and truly complete, and despite some awkwardness between Kurisu and Okabe given prior events there seems to be nothing but good times on the horizon.

Fun though all of this is of course, good times don't make for a good movie, and it seems that Okabe's prior exertions are starting to have some decidedly negative effects on him, as his memories of alternate timelines threaten to overwhelm him. More worryingly, an escalation in these issues threatens to cause Okabe to vanish entirely, not only in a physical sense but also from the memories of those around him. With even Kurisu struggling to remember the name of her former soul mate things aren't looking good, but it's up to our genius female scientist to strike out and do what it takes to save Okabe, even if it means breaking some tenets that she holds dear to her heart.

Although it has a serious story to tell, the first thing we have to say about this Steins;Gate movie is that it provides fan service (in the purest sense) by the boatload - the first fifteen minutes alone are crammed to the rafters with jokes that reference the TV series or play with your prior knowledge of its cast of characters, and it becomes immediately obvious that this is not a movie that is willing to patiently explain anything to newcomers. If you haven't watched the Steins;Gate TV series, don't even think about diving into this film blind, and even if you have watched the show before you might want a refresher to really enjoy every morsel of comedy and entertainment that it has to offer.

While the film keeps the comedy coming throughout, even bringing levity to some of its darker moments, the movie as a whole offers an enticing twist in allowing Kurisu herself to breath as the film's main character - it's a role that she fills with aplomb, and allowing her time to interact with the rest of the cast is in itself a satisfying addition to the Steins;Gate oeuvre that we hadn't seen too much of previously. Thankfully, she's helped along by the story that certainly doesn't hold a candle to that offered by the TV show, but one that still has enough drama and interesting ideas going for it to ensure that the film always has a direction and progresses at a decent pace throughout. It has few of the complexities of the series proper, and I suspect you could pick holes in its plot if you felt like doing so, but for the running time of Loading Area of Déjà vu it serves as a good construct around which all of that fan service can happily reside.

Visually, the film sits comfortably alongside its TV counterpart - it doesn't really have any action to speak of to require a big budget, but still feels like just enough of an upgrade to justify its theatrical standing, even if it exhibits the odd moments of laziness, particularly when it comes to a particularly dull set of opening credits. This is a small gripe against a film that depicts its characters exactly as you'd expect it to, which again will please the existing fans no end.

That, ultimately, is what Loading Area of Déjà vu is all about - catering (pandering, even) to the show's existing fan base and doing so in as comprehensive a fashion as possible. Cynical though you could be about such an effort, it does such a good job of catering to the whims of those in love with Steins;Gate that it was hard to leave the theatre with anything other than a smile - here is a movie that knows the strengths of its property and plays to them absolutely, quietly ushering newcomers out of the door without so much as a goodbye but rewarding those in the know by wrapping all of its self-referential humour up in an unspectacular but broadly enjoyable tale. Given the success of its TV outing, this surely isn't the last we've seen of this film in the UK?

Steins;Gate the Movie was screened in Edinburgh as part of Scotland Loves Anime 2013.

8
This is a no-go area unless you've watched the TV series in its entirety, but if you're a fan of the show then this film serves up ninety minutes of everything you could have hoped for from a Steins;Gate movie.
LATEST REVIEWS