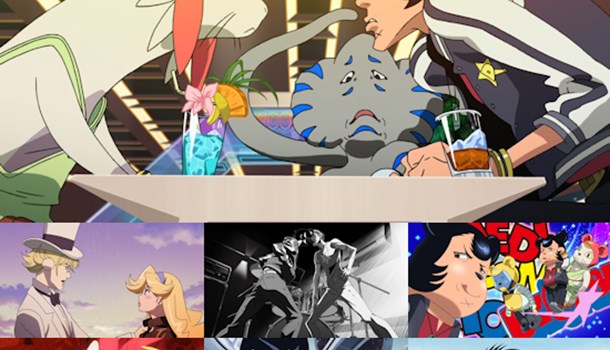 The universe is filled with infinite possibilities... indeed, there may even be infinite parallel universes in existence, which leaves me feeling more than a little relieved and happy that we reside in a universe where Space Dandy also exists. Having taken a look at the first season of this star-studded and multi-faceted comedy series from Studio BONES late last year, the time has now come for us to hop aboard the Aloha Oe once more for another series of adventures with the unique (to put it kindly) alien hunter and his companions.

In our review of Space Dandy's first series, I'd like to think that we succinctly covered all that is good and bad about the show as a whole - the wealth of creativity at its disposal and the way its leveraged to create such a wide gamut of stories is simply breath-taking, but the highly episodic nature of the show also means that not every episode will be to your personal tastes. Strictly speaking, this is also entirely true of the second season of Space Dandy, but with experience comes confidence and knowledge, and you can't shake the feeling that the episodes on show here are a result of that confidence and a team of creators who have made themselves entirely at home in this incredibly open universe.

Thus, the thirteen episodes spread across these two Blu-rays are very much a case of "all killer, no filler" - having already seen the series in streaming form previously, every time an episode ended and the next episode preview popped up on-screen I found myself excitedly shuffling in my seat to get to that next instalment thanks to my warm recollections of the fun I originally had watching it. Certainly, not every episode will entertain you to the same degree and your mileage may vary depending on your personal tastes, but there's only a single instalment that I might have considered skipping on this release were it not for my loyal, dogged duties as a reviewer (that being the decidedly odd episode 15, if anyone is curious).

The series hits the ground running by exploring the potential of those infinite universes we alluded to in our opening in hilarious fashion, rolling out more versions of Dandy and his motley crew than you can shake a stick at, and then never really falters from there whether it's reserving an instalment for Masaaki Yuasa to deliver his trademark surrealism, aping High School Musical or bringing us anime's best-named character in the form of disco dancing alien Ton Jravolta.

While it's easy to cite the show's comedy episodes of examples of how great the series it (and make no mistake, "what's your favourite episode of Space Dandy?" is already an oft-asked question amongst anime fans, such is the wealth of answers available to that query), there is far, far more to this second season than simply making you laugh. Witness episode 21 as a perfect example of the show's ability to take a detour into unexpected territory, delivering a surreal but visually stunning pause for thought as it ponders death - if Space Dandy were a band, this would be their prog rock concept album.

On that note, we really can't ignore the importance of the show's animation as part of Space Dandy's package - sometimes colourful and free, something exquisitely detailed, but always absolutely fascinating to watch and (much like the first season) a must-watch for anyone interested in anime as an art form rather than simply a medium for story-telling.

This second season also picks up on some other important facets of the show that were arguably missing from the first series, finding some time to delve into other members of its regular cast beyond our main trio and putting some flesh onto the bones of Honey and Scarlet in particular, while even finding some time to ponder Dr. Gel's past a little. This sits alongside the other main thrust of this season, as it begins to carefully sow seeds throughout regarding Dandy and his place in the universe to lead into a finale that wraps things up perfectly while still leaving room for Space Dandy to return in future, via an amazing visual tour de force that somehow manages to up the ante from everything that came before it.

Considering all of our talk about its animation, thankfully this Blu-ray edition of Space Dandy Season 2 is utterly, utterly beautiful - if you ever you want to make an argument for watching anime on a physical disc (and a Blu-ray disc at that) rather than streaming then this is it, as no current HD streaming format can compete when it comes to offering up the bitrate required to really appreciate this show's artistry. The rest of the on-disc presentation is also up to par - the English dub is excellent and does a good job of matching the abilities of the original Japanese cast (save perhaps for the show's two musical episodes, which work pretty well in English but better in their native Japanese), and we'd still contend that watching Meow speaking in French on the included French dub track is still a must for its unexpected comedy value!

Of course, there's also plenty of physical content to bolster this Collector's Edition release - as well as a piece of specially commissioned artwork to decorate the box itself, the two Blu-ray discs are accompanied by a whopping twenty art cards to cover the full gamut of art created for the show's Japanese disc releases as well as a 148-page art book filled with designs and drawings encompassing every aspect of the show. We've already talked about how the series is a must-watch for those interested in the art of animation itself, and this booklet offers even more for such fans to drool over. If you want to immerse yourself in the world of Space Dandy, this is an ideal way to do it.

If we were to sum up this second season of Space Dandy (which is exactly what I'm duty-bound to do, as this is the tail-end of the review), we'd suggest that it takes everything that made the first season enjoyable and polish it to near perfection. If the first series had episodes which didn't have much impact, such moments have been almost entirely excised from this second batch of episodes while still retaining the "anything goes" mantra of the show. The result is a supernova of creativity that likes of which you'll be hard-pressed to find elsewhere in anime - a compilation of sharp comedy, stunning animation and smart surrealism that will dazzle you and ensure that you're having a great time while it does so. Whether you're looking for a laugh or simply to see what's possible at the outer reaches of this medium that we all love, then Space Dandy has you covered.

Physical extras with this Collector's Edition include a set of twenty art cards and a 148-page art book.

9
Everything that we loved about Space Dandy's first season, polished up into a near-perfect gem of a series.
LATEST REVIEWS