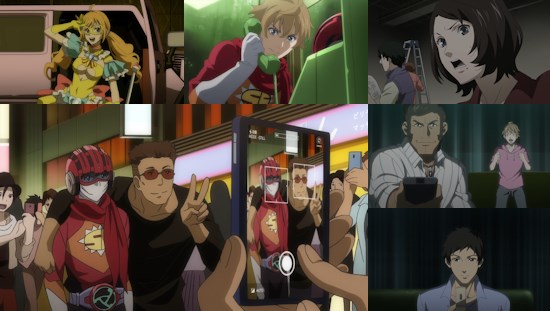 At this point in time there can be no doubt - we all love superheroes. Just take a look at the list of recent cinematic success stories, it's clear that we simply can't get enough of these arbiters of justice and their struggles to uphold what they believe to be right. Yet, as much as we marvel at these heroes and what they stand for, something has changed in the way we view these stories - for all of our love and admiration, we don't want to *be* heroes ourselves any more, and our tales of heroism are ever-more tinged with the suffering and struggles that we want to avoid.

Perhaps inevitably, Japan has played upon this shift in its own unique ways within anime. The recent hit One-Punch Man is a notable toying not just with the stereotypes of the shonen genre, but also the concept of what it means to be a hero, featuring as its star a disinterested fellow whose primary concern really isn't necessarily saving lives. Set against this, Samurai Flamenco could be regarded as "the anti-One-Punch Man" - this isn't the story of an overpowered hero bored with his lot, but rather an underpowered young man who yearns to be the kind of hero he saw on television as a boy.

The man in question is Hazama Masayoshi, a male model with a burgeoning career who has nonetheless chosen to reimagine himself as a crime-fighting hero: Samurai Flamenco, a man with the sharp edge of a samurai sword but the passion of a flamenco dancer. That said, there's nothing samurai or flamenco-like about our first meeting with Hazama - we find him naked, caught in the midst of changing into a costume that is soon accidentally reduced to a burning mess. This debacle comes at the hands of an off-duty cop named Goto - a man for whom justice is what he worries about only when he's working but is of little concern to him once he clocks off.

In spite of this personality clash somehow the pair strike up a friendship, although no amount of insistence from Goto that Hazama knock off the superhero act is going to sway him from pursuing his dream it seems. Thus, Goto is stuck cleaning up after whatever mess his new friend happens to make as Samurai Flamenco, while trying to ease him down a path that will at least stop him coming to real harm. Little does he know that his headaches are about to grow considerably - Hazama isn't the only wannabe superhero in town, and as time goes by it seems that the city is in need of a hero that precisely matches Samurai Flamenco's mould.

To call the first eleven episodes of Samurai Flamenco a crazy ride would be an understatement - the series starts out simply enough, as we watch Hazama's formative steps and see him grow from an idealistic young man who can't even stand up against a group of delinquents into something approaching a low-key but effective hero that captures the city's imagination. If this sounds like a concept that might run out of steam spread over 22 episodes then you might be right, but we never get the time to find out... episode seven blindsides the viewer with a seismic shift in the scope of Samurai Flamenco's story and never looks back from that moment forth, and by the time we reach episode eleven and the half-way point which marks the end of this collection we're watching another entirely different series.

These shifts are a major gamble for the series, but it's a gamble that pays off thanks in no small part to the steady hand of director Takahiro Omori, best known as the man at the helm of Baccano and Durarara's anime adaptations. As a result, the story tows the line perfectly between the escalating insanity of its evolving nature and the serious ramifications this has on the cast, a heady blend of elements that it crafts into a thing of madcap beauty. Quite how this series manages to meld the ludicrous sight of a superhero fighting his way through enemies using high-grade stationary with some arch political and social commentary is a mystery, and that it does so while simultaneously lampooning and borrowing heavily from tokusatsu series is a real joy to behold. Samurai Flamenco shouldn't work, and at times its narrative barely holds together without collapsing around itself, but much like the best heroes it manages to make it through these perils unscathed and looking more impressive than ever.

The one area where this series doesn't look impressive is with regard to its visuals. Yes, they're functional, but often barely, and the now-defunct Manglobe seemed to be stretched to breaking point and beyond even during the first half of this series as characters frequently lurch alarmingly off-model while action scenes and the likely barely hold together. This show certainly isn't pretty, and if anything its clean and detailed Blu-ray transfer here only serves to highlight just how subpar its animation quality is. If you're looking for a visual tour de force, this isn't it.

While we're at it, we should also warn buyers that this Anime Limited release defaults to the show's French dub - we guarantee that the series doesn't start in Paris, so the first thing you'll want to do is switch to the Japanese with English subtitles presentation from the main menu. Unless you're French, of course, in which case feel free to carry on. That aside, that English subtitle presentation is great - songs are left without subtitles (which is a particularly important omission at the end of one particular episode), but that aside everything is covered as well as you'd hope for the show's Blu-ray release and you won't miss any of the enjoyment inherent within these episodes as a result. This Collector's Edition also offers a booklet filled with art and designs from the series - a fun little addition given the imaginative monster designs within the show in particular, although not the most memorable edition of this kind for a Collector's Edition release.

Provided you can move beyond its subpar animation, then this first half of Samurai Flamenco is an absolute joy to watch - a series underpinned by a well-placed chalk and cheese relationship between its leads, and one capable of being both utterly daft and providing important cultural commentary, often at the same time. It's smart, funny and paints a vibrant picture of its escalating circumstances in a way that can charm and surprise. Maybe you don't want to become a hero, but you can bring a little justice to the world by giving this underappreciated gem a few hours of your time to let it work its magic.

8
Not a great looking first half of the series, but one so packed with imagination and sufficiently capable of handling its ludicrous yet smart story that you'd do well to watch and enjoy.
LATEST REVIEWS