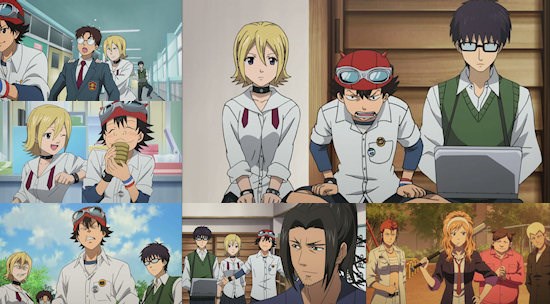 If anime is to be believed, after-school clubs tend to attract one of two types of people - lazy, apathetic types who just want to hang out with their friends, or outright oddballs who everybody else in the school tries to ignore as they get up to crazy shenanigans.  Of these two archetypes, the trio of individuals which makes up the SKET-dan (the show's title is a play on "SKET-dan su") fit pretty tidily into the latter category courtesy of the "unique" personalities and traits they have a tendency to show.

However, for all its suggestion of rebellion, this particular after-school club isn't out to cause trouble - rather, it sets out to prevent it and serve as a friendly point of assistance for students no matter what troubles or difficulties they might face.  To that end, the SKET-dan's club name is in fact an acronym, standing for Support, Kindness, Encouragement and Troubleshooting.  Oddly, despite this helpful, friendly and generally cheerful outlook, the SKET-dan is short of members, clients and appreciation from teachers, although as we begin our journey through the series it does perhaps become a little clearer as to why.

Not to put too fine a point on it, the SKET-dan has a pretty unconventional way of handling problems, not helped by the fact that it consists of a former female delinquent with a short temper, a geek who insists upon talking only through his laptop (this is very annoying, incidentally) and a club leader who exhibits super-human concentration only when wearing his trademark pair of goggles.  See, I told you they were oddball...

These characters are introduced via a new transfer student to the school, who finds himself all but dragged into the SKET-dan club room before later relying on their assistance in the wake of some issues with bullying that emerge.  This opener ends with an unexpected twist to the story, and although I'd like to tell you this shift is the final cherry on top of an already stellar episode, the truth is anything but.

Although subsequent episodes do improve upon things somewhat, most notably managing to find some semblance of comedy where its opening instalment struggled to do anything worthy of mention, these opening episodes of SKET Dance are largely so abjectly mediocre as to be utterly boring to watch.  There isn't much I can actively criticise about the series, but it sits in such a "safe zone" that it doesn't try to do anything even remotely out of the ordinary - its characters quickly become predictable in their actions and energetic outbursts, and almost every scene feels like something that you've seen attempted by countless other series in the past, only carried off much better to boot.  The good-natured banter between its main trio makes you want to like them, but no matter what problems and dilemmas they're faced with you simply can't find it in yourself to care what they get up to.

The only real saving grace of SKET Dance's early instalments is its episodic outlook, with single episodes (or even sub-episodes) focusing on a single character in need, sucking them dry of perceived entertainment value and then moving straight on to the next without so much as a goodbye handshake - its a quick-fire turnover of secondary characters that at least keeps things moving and relatively fresh in the show's otherwise tired environment, albeit at the risk of throwing any gems away in the process... not that we've had any of those yet.

On the basis of these opening three episodes, SKET Dance is a poster boy for inoffensive mediocrity, to the point where even its supposedly "edgy" gags which require censoring are pretty weak sauce that will raise more sighs than laughs.  In these fan service-laden times filled with series based on occasionally disturbing concepts perhaps we should be championing a show that tries to celebrate the innate goodness in its main characters, but when the fare it offers up is this tepid there really isn't a lot we can put forward in its defence.

5
A nice concept that gives birth to a tried, utterly average anime with little to hold the attention of its viewers.
LATEST REVIEWS