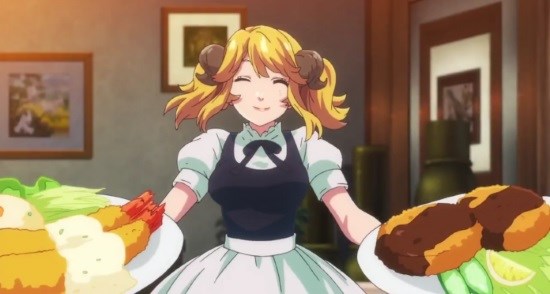 Restaurant to Another World - Eps. 1-4

What's comfort food to you? I love all sorts myself: Chocolate, ice cream, fish and chips.... So many lovely things to help bundle me into nice relaxed mood after a particularly hard day. There's comfort food for the eyes and brain too. Books and films that may or may not be out and out classics, but just do it for you on some level. The ones where the pages are falling out because they've been read so often, for so long. I bring this up because anime shows often attempt to aim for a similar kind of comfort viewing - Restaurant to Another World has set its sights on being one of those, it's largely succeeding too.

Once every seven days, on the day of Satur (see what they did there?) a special door appears around the world. Like some superior version of Dr Who's TARDIS the same door appears across the whole world at the same time, in mines, forests, homes, and streets. Those who dare to venture through it find themselves somewhere very different. Where light glows without flame or magic, where water is free and pure as can be, and where the food is so divine that people will crawl over glass for just one more bite. This is the Western Restaurant Nekoya, that serves customers from our world and theirs: The Restaurant to Another World.

There's not too much else to say about the show story-wise, as it has found a formula and it's sticking with it pretty aggressively. Each episode you get two short stories wherein someone finds their way to the restaurant to be amazed and hooked on the food they find there, then swear they'll be back. There's no real plot, no character arcs, nothing but the same story with a different character. Ordinarily there's no way this could ever be a good thing, especially from a show with such rich potential: The first episode set up the possibility of a big character driven story, between new waitress Aletta and the Master (no, not that one Buffy fans), which would cross over with a variety of fascinating characters. Such as the brilliant dragon queen, who treats the door to the restaurant as one of her treasures. Alas, the show didn't go that way, but the it's such a charming show that you don't really mind too much.

Somehow director Masato Jinbo (Fate/kaleid liner Prisma Illya) has managed to make the show so welcoming and homely that you want to sit there and let the whole thing wash over you, to clear away the stress of the day. It helps, of course, that Silver Link has done a great job with the production. The varied cast look great and each is distinct, while the animation and backgrounds compliment each other wonderfully. The all important restaurant, that serves as the backdrop for 90% of the material, comes across as somewhere you'd love to go and eat (and you probably will be able to, as it's likely a shoe-in that the show will get a tie in cafe sooner rather than later).

Whether or not the show can continue to sustain itself in this matter remains to be seen, but I suspect it may just manage it. You could probably put this into the same category as shows like Wakakozake, that just keep you coming back for more without ever providing much in the way of substance. If you're tired or stressed at the end of a long day then this show is the prefect palette cleanser.

You can currently watch Restaurant to Another World in streaming form on Crunchyroll.

7
Unsubstantial yet soothing and relaxing veiwing