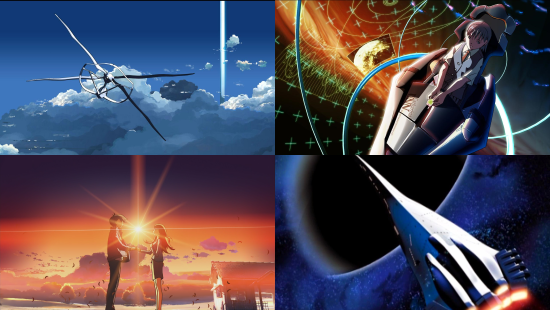 Today I have learnt that the Voices of a Distant Star OVA is almost fifteen years old, and its partner feature film in this colection, The Place Promised in Our Early Days, is almost thirteen years old. I first saw these films in their original DVD form when they were released in late 2004. Back then, these were perhaps one of the more intelligent and adult animations which took my breath away back when I first saw them.

Now, after a long wait, we finally get to see these two films by the currently-fêted Makoto Shinkai, plus other extras, in glorious remastered high definition. These films were some of the first works by Shinkai, who has since gone to make highly acclaimed features like 5cm per Second, The Garden of Words and the current Oscar nominated Your Name.

Voices of a Distant Star

This 25 minute OVA is set in the future where mankind has extended out into the near Earth solar system and have discovered an alien species who have turned out to be hostile. In response, the UN Spacy have assembled a battlegroup and mech fighters to take on the enemy.

However, this is merely the setting and the background story within which the real story is told. Voices of a Distant Star is the story of a couple, Mikako and Noboru, who have been together since school. They both sought to become pilots for the UN, however only Mikako was able to perform adequately enough to be recruited. When Mikako is deployed, they maintain contact via e-mail, sending messages of love and friendship to one another, hoping to see each other again. But as is the nature of military deployment, Mikako is stationed further and further away - first Mars, then Jupiter and then Pluto. As she moves further away the messages take longer and longer to transmit and receive due to the speed of light. What starts with a 30 second delay grows to 6 months, a year, then 8 years as the distance between them grows. However, even with the time delay and a huge age difference due to relativity, Mikako and Noboru still yearn for each other and correspond.

All this aside, Voices of a Distant Star is very well produced, gorgeous and has remastered well into HD considering its age and 4:3 format.

The Place Promised in Our Early Days

Hiroki, Takuya and Sayuri have both grown up in the shadow of the tower in Aomori and team up together to construct an aircraft from the remains of a downed drone, working every hour available in a US armaments factory to make the aircraft fly with the dream of finally making it to the tower. Hiroki promises Sayuri that he will take her there; it becomes his Promised Place to her.

Unfortunately, as the tower is finished, Sayuri falls into a deep sleep and doesn’t awaken. She subsequently vanishes into a military laboratory. It seems that she has some kind of a connection with the tower and as she slumbers and stirs, the tower reacts, focussing its energy across dimensions. However, Hiroki is determined that he will find Sayuri, and take her to the tower to fulfil their promise.

All in all, this Blu-ray collection is well presented, and if you are a fan of Shinkai’s more recent works, this collection is worth having purely to see both of his early works in High Definition.

English and Japanese audio with English subtitles. Extras consist of She and her Cat: Their Standing Points – 1999 4 minute short; Interview with Makoto Shinkai; Alternative Japanese Audio for Voices of a Distant Star with Storyboards; Cast and Director Interviews for Place Promised in Our Early Days; Trailer collections for both films.