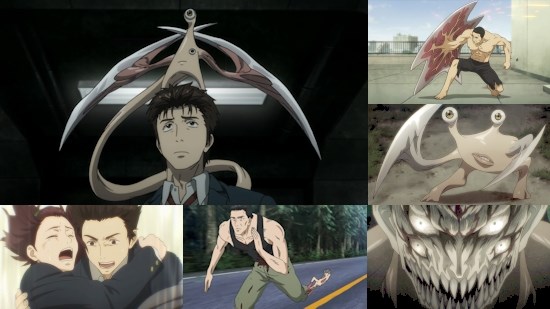 In my initial review of Parasyte -the maxim-, I was blinded by joy and excitement that one of my favourite manga series was finally being animated. I was elated by the almost grotesque animation of the parasites as their forms transmogrified, and Migi... well, Migi was just blunt, intelligent while cold, but understandably so. I left the review on a high, just as the series was getting started, with other parasites getting organised and the human excrement hitting the fan blades, possibly as a result of being flung from the guts of a human as they are being disembowelled by a hungry parasite.

Many of my original comments hold true and, if anything, the series continues its dark plummet as the ambitions of the other parasites become apparent and they begin to form colonies to allow them to camouflage better into human society. As expected, the gore, violence and consumption of human flesh continues as they organise themselves and slot themselves into the power structures of the human world. Humanity appears to be ignorant to their advances at first, but it doesn’t take long for this to change.

Change is rife in the series. For instance, Shinichi began as a bit of a wimp, but is transformed and evolved by his symbiotic relationship with Migi to a point whereby come the end they cease to be whole separate organisms co-operating for their mutual benefit but instead form a full-on parasite/human chimera as the series reaches its climax with the fights between Tamura Reiko and her near-invincible parasitic creation.

The impact of the symbiotic/chimeric transformation is only lightly touched initially in the series. Those around Shinichi can sense that something is not quite right, and can detect the parasitic “energy”. In fact, this is partially what attracts his romantic endeavours, but the sheer fact that he emits these energies makes him not wholly human. This topic deepens as Migi saves his life after a parasite that takes on the identity of his mother attacks. Shinichi discovers that the deeper merging with the parasitic cells reduces his humanity to the point where he becomes nearly completely unresponsive to emotions, leaving him unable to even mourn the death of those around him. However it is the ongoing conflict with the other parasites, and his ongoing confrontation with Tamura Reiko, that allows him to actually appreciate what humans and parasites are to each other. Humanity is the only species on the planet without a predator, at least until the parasites come along.

Eventually, the authorities become wise to the threat and discover the nest of parasites who have taken over the municipal council building, and this marks the end of the conspicuous parasites and further changes to their relationship with mankind.

Parasyte is a series whose pacing can only be described as a sine wave. It is an up and down rollercoaster where at times events pass so quickly that you barely have time to process, for instance, Shinichi’s confrontation at school against Tamura Reika’s spy, to others where the series reaches almost Dragon Ball Z-like levels of build up before a big event. To be fair, these pacing issues also exist in the manga, but it is less noticeable. Its effect is unfortunately quite negative as it means that the series does drag on a bit. The effect of stretching the story to fit 24 episodes rather than, say, 20 perhaps?

One of the rather refreshing things I have enjoyed most about the series is the art style and quality that has been made apparent throughout the series. I prefer the more realistic styles of the characters, as it adds to the realism of the show and increases the impacts of the parasite’s transformations, though nothing will beat the winged demonic corgi from earlier in the series. Never have I been so terrified by something oh so cute.

The real surprise of the series is Shinichi. I’ll be honest, I didn’t actually like him at first. His personality, lack of will and spine hit slightly too close to home. But after seeing his trauma, his ability to cope and watching his character bloom all the way up to the final moment in the final episode, I finally decided that I liked him a lot and he changed from being just a body for Migi to becoming the true star of the show.

All in all, I am impressed as to what has become of one of my favourite manga series and for once, I come to the end of a season and actually don’t ask for any more. It’s good to have a series with a firm ending for once!

You can currently watch Parasyte -the maxim- in streaming form on Crunchyroll.

8
It has lots of ups and downs, but Parasyte is full of chimeric quality.