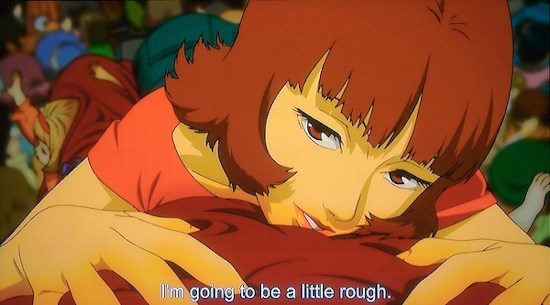 Paprika is a sci-fi adventure that blends fantasy and imagination, as it follows the story of a group of scientists who have discovered how to both record and enter a subject's dreams. The machine is stolen and it's a race against time to stop the thief from using the device for their own nefarious ends.

Doctor Atsuki Chiba, who uses her dream alias of Paprika, a red-haired and vibrant character, to help patients with their troubled psyche. It is she, along with Detective Toshimi Konokawa, who must recover the stolen "DC Mini" unit, which is already causing havoc.

The late Satoshi Kon's Paprika is a dazzling animation that, along with Susumu Hirasawa's incredible score, creates one of the most intense and imaginative films of the last 20 years. I was lucky enough to see the film at a cinema on the big screen, and it was breathtaking. It loses little impact on Blu Ray, the film is still incredibly sharp, with masterful direction, camera angles and action sequences that mix reality and fantasy to great effect.

This is a film that really showcases the power of music in a film. It's an old filmmaking adage that you should never skimp on your score - something Spielberg and Zemeckis have clearly understood throughout their careers, and this is a film that greatly benefits from a good sound system. It's hard to describe Susumu Hirasawa's work to anyone who hasn't heard it - bizarre samples, off-kilter mixing and punchy choruses elevate the visuals to a full on experience, a perfect marriage of masters at work, complimenting each other wonderfully. The end result has a timeless quality that gives even the mighty Akira a run for it's money (and goodness knows that Paprika is a more coherent story!)

If my shameless gushing hasn't already tipped you off, let it be known that Paprika is far and away one of my favourite Japanese films. The sublime mix of dull reality and bizarre fantasy is a powerful mix, and I compel anyone who cares about animation of any origin to check it out. This is a film that deserves a place in your collection, it is anime gold.

10
A tour-de-force by two talents at the pinnacle of their careers. Breathless animated cinema.