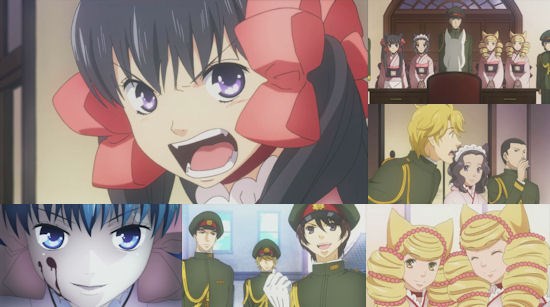 Introducing a world where spirits and humans mix (or, more often than not, clash) isn't exactly a new concept within the world of anime, ripe as it is with obvious opportunities for dramatic plots and stories; so, with that in mind it isn't all that surprising to find just such a series within Japan's autumn anime season line-up, which is brought to the UK courtesy of Crunchyroll.

Otome Yokai Zakuro is an adaptation of Lily Hoshino's on-going seinen manga of the same name, brought to the small screen via J.C.Staff.  The focus of the series is an alternate-universe Japan just as the country is undergoing Westernisation - an occasionally important part of these early episodes as it's sometimes the changes brought about by this Westernisation that brings the ire of normally harmless spirits as they find themselves clashing with human affairs.  With cases involving errant spirits on the rise, a new Ministry of Spirit Affairs is created, mixing in military personnel on the one hand and pairing them with a quartet of female half-spirits in the hope of both resolving any cases which come their way satisfactorily while also improving relations between the spirits and mankind.

With three respected military men matched up with these four spirit girls, the immediate opportunities available to Otome Yokai Zakuro are obvious, creating a blend of personality clashes and love at first sight moments as dashing men come face to face with these half-spirit beauties.  However, the real focus of much of these earlier episodes lands upon the titular character Zakuro, and her love/hate relationship with her assigned partner Kei Agemaki - a situation which is played for laughs early on as Zakuro's initial resistance to the concept of working alongside humans turns to love as Agemaki's charm wins her over, before this fleeting interest is crushed as it turns out said charm offensive was primarily deployed to hide Kei's crushing fear of spirits.

These early twists and turns set up Zakuro as a typical (and to be honest almost painfully predictable) modern anime tsundere, while the content of each episode also soon falls into a pattern of setting up a case to be investigated and seeing it through to an inevitable ending which involves the girls resolving a spirit problem with either the help or hindrance of their male counterparts.  In fairness, these episodes also begin to build towards some kind of larger, over-arching plot with Zakuro at is centre, although exactly what this means for the series going forward is hard to tell at this point in time.

One thing that can certainly be said of Otome Yokai Zakuro is that it looks the part - while the visuals aren't mind-blowing, the series does enjoy gorgeous character designs throughout, from the girls to their male counterparts and via the spirits depicted in-between.  The rest of the show's aesthetic also delivers the goods, with some nice representations of its alternative yet very recognisable Japan cropping up from time to time.

Thankfully for this series so far, those visuals and its generally likeable roster of main characters do enough to paper over the fact that we haven't really seen anything newsworthy in terms of its plot up to this point, so how successful the series ultimately proves to be will be largely dependant on what it has planned for Zakuro and company.  The pieces are certainly moving into place for something a little more interesting than some generic romantic comedy and "monster of the week" shenanigans, so provided the final picture provided by that jigsaw puzzle is a satisfying one Otome Yokai Zakuro could prove itself worthy of some of your time.

7
Predictable at times as it builds up towards deeper storylines, Otome Yokai Zakuro's potential is clear and its early episodes get by thanks to decent characters and its visual aplomb.
LATEST REVIEWS