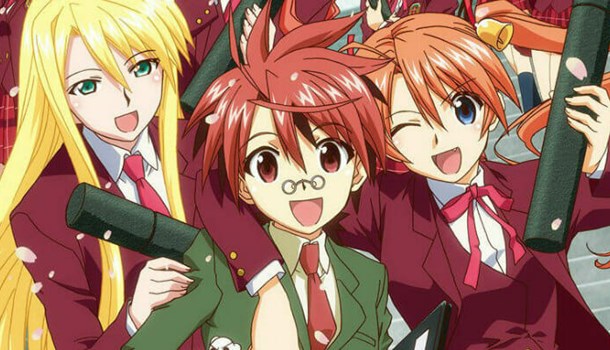 Negima is back, and though the title might suggest a continuation of Revelation's show, this is in fact a complete reboot, known in Japan as Negima?!

For those that have somehow missed Negima, the story revolves around young 12 year old wizard Negi Springfield, son of the legendary Nagi Springfield, also known as the Thousand Master. Young Negi is transferred to Mahora Academy to continue his training, taking up the post of a teacher for a class of dim young girls (some of which have dubbed themselves the Baka Rangers - Baka means Stupid in Japanese y'see). However, no one at the school is entirely what they seem, so while Negi has to deal with daily life as a teacher, he also has to defend his class from vampires, pixies and other supernatural beasties. As if this weren't enough, some of his class discover Negi's magical powers and become his partners, a deal that can only be sealed with a kiss...

The original series, whilst generally well received, was deemed too twee, and so this new version ups the action, whilst keeping the romantic and comedy elements intact. The opening episode is certainly a lot more dynamic, and the first arc deals with the vampire Evangeline, who uses dolls to do her fighting and once fought Negi's father.

One of the welcome changes is the toning down of the ecchi (sexual) content, which was always ill at ease with the colourful and otherwise youth-friendly show. Unfortunately they didn't change the cast for the dub, so the same screeching, irritating noises can be heard if you neglect to opt for subtitles and the original language track. Do yourselves a favour and spare your eardrums this horrific dub.

The animation and music are solid TV quality, and the direction is sharp and snappy.

Whilst some of the story lines are even older than I am, the sheer number of episodes (13) and the improved qualities of the show make this a good value purchase for Negima fans, and one that comes warmly recommended.

Textless songs, notes from the classroom and selected commentaries by the cast, which are a bit vapid to be honest.

8
A solid offering from Manga which trumps its predecessor.