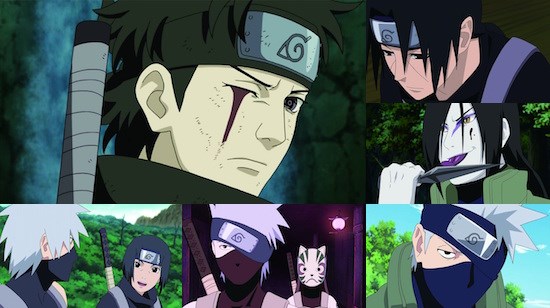 I suppose the first thing we need to address here is that while the label on the box says “Naruto Shippuden Box Set 28”, what we actually have here is a “box set” of The Kakashi Chronicles. These episodes focus almost entirely on a young Kakashi and those surrounding him at the time. Fans of Kakashi, Yamato, and Itachi in particular are well catered for.

The set kicks off with yet another look at Kakashi’s involvement in Rin’s death (get used to those scenes, you’ll be seeing them a lot in these episodes), which long term viewers of the series will be more than familiar with by this point. We then cut to a young Kakashi, who had obviously been reliving those events in something of a daydream, doing his best Lady MacBeth impersonation. This scene effectively imparts that Kakashi is struggling to cope with the death of Rin, which proves to be a repeating theme in this box set. Though I am somewhat disappointed that he doesn’t utter those immortal words: “Out, damn'd spot!”

The opening episode of the set introduces us to a younger more distant Kakashi who is struggling with his demons, and covers the period when the Third Hokage stepped down and the Fourth took over. This seemingly simple transfer of power is not without it’s drama, as Danzo is set on Orochimaru taking over the role instead. Danzo’s schemes crop up a lot in these episodes, it rather makes you wonder how his machinations were tolerated for so long.

Oddly, Lord Fourth thinks the answer to Kakashi’s mental strife is to assign him to the Anbu black ops division. Quite how joining an assassination squad is supposed to help you cope with your guilt over the death of a friend and colleague is beyond me; maybe it’s a ninja thing? The second episode sees a lot going on, with the release of the nine tails, the death of Minato, and also Danzo's plot to prevent the Third Hokage from reassuming power by assassinating him. All this is played out from Kakashi’s perspective. Most of the set from that point is taken up following Kakashi in various Anbu escapades. First his travails with Yamato (known variously as Kinoe and Tenzō in these episodes) and latterly his time with a talented young protégé by the name of Itachi Uchiha. However, the set finishes off with somewhat more familiar fare, as Kakashi takes on the role of Chūnin squad leader.

Some of the earlier episodes are poor, but the good news is that this set gets better as it goes along. The latter half is considerably better than the first half, meaning taken as a whole it is relatively entertaining. However, the odd thing about this set is that, as a long term Naruto viewer, a few things feel a little off. Perhaps it is my memory playing tricks, but the timeline of certain events in these episodes don’t seem to fit with what I remember of the same events when they cropped previously up in Naruto Unleashed and Naruto Shippuden. That makes these episodes difficult to rate. They are entertaining enough for the most part, but in places they don’t seem fit correctly within the wider Naruto canon.

There’s also the issue of whether these episodes need to exist at all. Kakashi’s a popular character in the Naruto universe, so I can see why the decision to focus on him would have been an easy one. However, there is often the danger with these kinds of retrospectives that some of the mystique and intrigue can be lost by answering questions which should never be answered. I won’t spoil things for you by going into detail but, sadly, that’s all to often what we have here, questions that didn’t need answers being answered in ways which diminish the whole. Something is lost from the characters we know and love as a result of delving too deep into unnecessary backstory, this is especially true for the cool, aloof and deliberately mysterious Kakashi. Though in the end these episodes are just about entertaining enough in their own right to justify their existence.