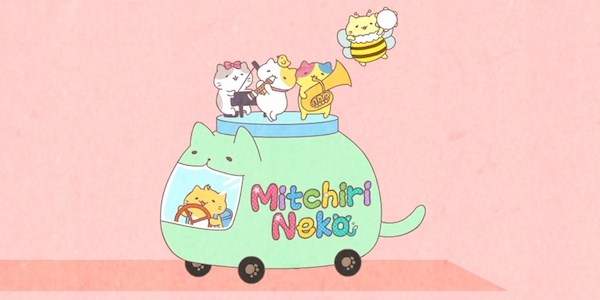 Before you read this review any further head over to YouTube, search for “cat marching band” and watch the first result. Firstly congratulations – you’ve now watched one of the best videos on the internet. Secondly you now have an idea of exactly what to expect from Mitchiri Neko, which is a new weekly series of shorts based on the multimedia merchandise brand by Frencel. Starting out as a four-panel web manga back in 2012, since then Mitchiri Neko has encompassed Youtube videos, plushies, smart-phone games and so much more.

Roughly translating as “cats that stick together”, Mitchiri Neko features the misadventures of dozens of brightly coloured cats that are said to multiply greatly when left alone. The short minute-long skits also introduce some of the more notable members of the Mitchiri Neko family, including the Confused Detective, the chick-loving Piyopiyo, Honey the bee cat and the King of Cats - a hungry lion who’s more than happy to snack on his fellow kitties.

Sandwiched between last year’s Bananya and Netflix’s forthcoming Rilakkuma stop-motion series, the release of Mitchiri Neko continues the recent trend of merchandise brands making a proper jump to anime. However the surprise success of Bananya also set a very high standard for those coming in its wake, and sadly Mitchiri Neko is no contender for its crown. Whereas Bananya was a surprisingly detailed affair for a less-known Japanese stationary line, Mitchiri Neko takes a far more simplistic approach. Backgrounds are a luxury, the cats are all virtually identical save for colour and/or clothing and visually there’s very little to distinguish it from the other online shorts that preceded it. That might have been perfectly acceptable in a pre-Bananya landscape, but post-Bananya there’s very little to really make it stand out. Crunchyroll is already swamped with bite-size shows that barely register with Western viewers, so it’s kind of sad to see a brand that’s created something so great in the past getting lumped in with those.

The humour works to mixed effect, and relies more on the absurdity of the scenarios rather than a particular joke. These can range from really basic scenes like a hundred neon-coloured cats trying to play football, to utterly bizarre circumstances like a roll of sticky tape that’s actually just a very long feline. The approach is akin to the Sanrio’s Gudetama shorts, which feature similarly minimalistic levels of animation, music and dialogue. Maybe it’s just the humour not translating over very well, but it feels less about the jokes themselves and more about just enjoying five minutes of childish distraction amongst some cute cats. Given all the doom and gloom in the world at the moment there’s definitely merit in simply striving for that, but it isn’t going to be for everyone.

But perhaps Mitchiri Neko’s biggest rival is itself, as none of the skits from the episodes released so far come even close to the YouTube video mentioned at the beginning of this review. The only thing that comes close are the end credits, and even those feel like they’re riding on the back of that video’s success. Both the melodies and visuals are very similar, with these end credits switching out the marching band to focus on some of the more interesting felines featured here. With the marching band video approaching five years old and still easily the best thing they’ve done, did Mitchiri Neko simply happen to catch lightning in a bottle? The show may have something incredible up its sleeve, but right now its just coming across as a lesser version of itself.

Ultimately Mitchiri Neko was never going to be anything award-winning – it’s simply a cute little show about cats that’s cheaply made and aims to flog a bit of merchandise. But while it’ll certainly never reach the heights of Bananya, it still has its own unique charm that might make it worth putting five minutes aside each week for. If you like cute cats doing ridiculous things, then this should fill your quota for that nicely. If not, well you should still watch the marching band video anyway – cartoon cats don’t get any better than that.

You can watch Mitchiri Neko in streaming form via Crunchyroll

4
Cute cats do silly things. Nothing more, nothing less.