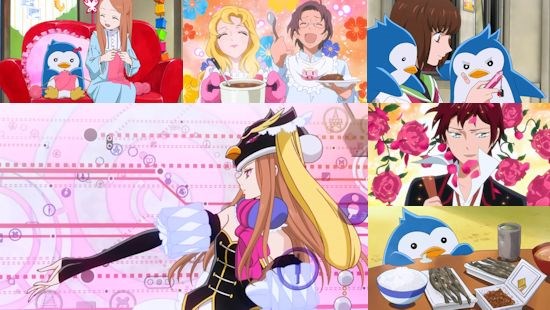 No matter our beliefs, we all have a tendency to band around words like "fate" or "destiny" as part of our everyday commentary on life and the human condition. But is there such a thing as fate, and what can a belief, or conversely a refusal to believe in, such a concept shape a person's life? This is just one of the questions which runs through Mawaru Penguindrum, the first series to be directed by the much-vaunted Kunihiko Ikuhara since Revolutionary Girl Utena, and now coming to DVD in the UK via Kazé.

At the heart of the series are three siblings which make up the Takakura family - brothers Kanba and Shouma, and terminally ill sister Himari. When a visit to a nearby aquarium as a treat for Himari looks set to be her last day on this mortal coil, the trio are granted a decidedly unusual reprieve from their grief, as a penguin-shaped hat bought for their sister on a whim proves to hold the power to bring Himari back to life. Of course, everything has its price, and in return for prolonging their sister's life this "alien" creature demands that Shouma and Kanba search for the "Penguindrum", some kind of mystical object that even the one who desires it seems to have no clue as to the exact properties of.

It's this hunt for the MacPenguinguffin... sorry, the Penguindrum... that brings the family into contact with Ringo Oginome, a girl with a rather over-bearing interest in a teacher named Tabuki. While the Takakura brothers seek to deny the concept of fate or destiny at every turn, Ringo has entirely embraced it, with her diary proving to be the prompt for her every move as she seeks to consummate her love for Tabuki no matter what it takes. Is this diary really the Penguindrum we seek? "Probably", is the less than helpful response from Himari's rather parasitic guest.

There's really no escaping the fact that, on its surface, watching Mawaru Penguindrum is a surreal experience - how else would you describe a cute hat that brings a girl back to life, a diary that purports to define the future, and a trio of penguins that only the Takakura siblings can see that constantly get up to mischief? By the end of this first half of the series, things are mired in even more bizarre and far-reaching territory, as well as nodding towards the sarin gas attack on the Tokyo subway and littering its story development with literary nods aplenty.

Such is the scope of Mawaru Penguindrum that it's rather hard to define or discuss in terms of a review without either spoiling things or sounding like a lunatic, but what we can say is that the series manages to be accomplished at much of what it attempts. Alongside a core concept that's intriguing in its own right, the show's main (and ever-growing) cast of characters are also largely well-realised, and there's a lot of enjoyment to be had simply from watching them interact with one another and grow as a result - when you find yourself sympathising with a crazy stalker it must be doing something right! The series also has a keen eye for comedy, sprinkling the show's complement of penguins doing goofy or daft things into even the most serious of scenes and occasionally having fun with the show's theatrical way of framing things by taking an entirely literal path from time to time.

There are some flaws to Penguindrum's approach to telling its story however, and some elements of its narrative come off as clumsy or heavy-handed - using literary devices to bring another angle to some of its topics is great when it's done well, but having random little kids spouting commentary on Night on the Galactic Railroad while walking past doesn't count as "done well"! Alongside this, the amount of flashbacks which pile up within episodes at times would be impressive if they didn't completely ruin the flow of what's going on or jump off on pointless tangents quite frequently. By the end of this batch of episodes there's a concern that the series has simply bitten off more than it can chew in terms of the number of subjects it's trying to cover, but we'll have to wait for the second half of the show to draw any real judgement on whether this is the case.

Visually the series is, by design, a mixed bag - in general it favours a relatively restrained palette and more realistic look, offset by sudden bursts of colour to complement its more theatrical or otherwise surreal moments. These stylistic shifts all fit in perfectly with the tone of the series, and once you dig a little deeper you can find plenty of the hallmarks of Ikuhara's trademark style in the presentation as a whole. Musically, the series is outstanding - alongside its great incidental music, the show's opening and closing themes are (to quote the series itself) "fabulous max", as are the insert songs utilised to date.

If only that audio wasn't sped up by 4% as part of the volume's NTSC to PAL conversion, eh? Unfortunately, this process both distorts the audio of this volume in places (although thankfully it's only really noticeable in pieces of music), while the sped up video also causes issues on a couple of occasions where shots simply pass by too quickly to be taken in. Thankfully, these problems aren't show-stoppers, but it's another occasion that leaves us wistful for either a Blu-Ray release or a native NTSC release free from any conversion issues.

That aside, our only other gripe is the inconsistency in sign subtitles - some signs are translated and others aren't, which makes for an uneven treatment that never allows you to be sure of whether you're missing something important or not. More generally, one or two odd choices or mistakes aside the subtitle track is solid, and the dub is actually rather good for the most part to offer up an enjoyable viewing experience in its own right.

If you have a hunger for anime that provokes thought or generally has a lot to say, then this first half of Mawaru Penguindrum is well worth checking out - for all its over-the-top theatrical moments and slices of comedy, it's clearly a series that wants you to think about what it's trying to say as it abstractly waxes philosophical and ponders various facets of the human condition. It doesn't succeed at everything it tries to do, but as a visually engaging piece with a cerebral core it's a refreshing effort that we haven't really seen the likes of since... well, Revolutionary Girl Utena, most likely.

English and Japanese stereo audio with English subtitles.  Extras on this DVD consist of karaoke opening and ending themes and a promotional video spot.

8
It isn't quite fabulous max, but this first half of Mawaru Penguindrum is both entertaining and engaging.
LATEST REVIEWS