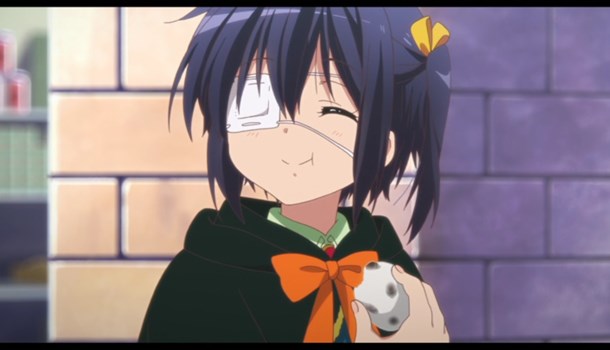 Love, Chunibyo and Other Delusions: Take on Me

Set after the second season of the show; Love Chunibyo and other delusions: Take on Me finds Yuta and Rikka in a relationship where they spend more time talking away rather than being romantic. When it comes to love and romantic situations both find themselves shying away instead of taking the initiative to progress their relationship further. So, needless to say their friends are rather annoyed at the progress or lack thereof in regards to their relationship. Things take a sudden turn when Rikka's older sister reveals that she's moving to Italy and plans to take Rikka with her. This causes the couple to scramble to find any odds and ends that will allow Rikka to stay with Yuta in Japan rather than move away. After stumbling away to find anything, at the suggestion of their friends they come up with a plan to run away and elope. However their plan takes a turn when Rikka's older sister manages to blackmail Rikka and Yuta's group of friends. Thus enlisting them to help find where the couple have run off to. Thus begins a cat and mouse chase between the couple and their friends to find them.

For the most part Love, Chunibyo and Other Delusions: Take on Me sets itself up as a romantic comedy road trip movie with Yuta and Rikka on a voyage of discovery as they evade their friends and Rikka's older sister. The film mostly has Yuta be the main focus with him trying to work out his feelings for Rikka with regards to how he wants to spend the future with her. To tie into this is also Rikka's thoughts on her and Yuta's relationship with regards to her Chuunibyou personality traits. For those who haven't seen the series or are unfamiliar with Chuunibyou as a concept; it's basically people acting out fantasies and having eccentric behaviours in rather esoteric and niche sub-cultures. In essence, pretending to be a character or acting in an overzealous way showcasing delusions of grandeur. It's that phase that most of us went through in our pre to mid-teens were we acted out in various ways. Such as being overly anti-establishment and rebellious, acting like we had magic powers or being really into one hobby and having that be the thing that defines our personality. In Rikka's case her Chuunibyou is that she acts like a fantasy heroine believing her eye holds a dark demonic power that can only be sealed with an eye patch constantly over her eye.

Thus the main conflict that comes in the movie is that Rikka's older sister wants her to snap out of this behaviour and grow up (not really an unreasonable demand given Rikka is turning 18 soon) and that if Rikka changes out of this behaviour and fully accepts being Yutta's girlfriend in a more romantic fashion will he still love her. We see this aspect dotted around the film in various comedic moments and other conversations characters have. Mostly pertaining to Yuta talking with Rikka's family about her and coincidentally their future together. This makes Yuta think about the future after high school and his future with Rikka. Here the film could have done a bit more to progress this aspect and add layers to it but in essence it really feels like a rehash of the same conflicts that arose in the second season when Rikka and Yuta first started dating. In turn making this a film that doesn't go fully out of the way to be more dramatic but pleasant enough to be one the fans were expecting to tie up the loose ends and bring closure to.

Speaking of which, the production values of this film make it feel like an extended episode of the show rather than a film meant to be the climactic ending to the franchise. If you were to say this was the actual last three episodes of the series bundled together in one compilation, I'd believe you. Usually Kyoto Animation really put a bit more effort into their theatrical animations to make them pop just a bit more than their Television counterparts. Here it seems like they just made a cleaner version of what they produce for television. When watching I was hoping they'd go all out with the imaginary battles that characters take part in, yet we are only treated to one battle that is rather short. The main focus was the jokes and real world aspects. Which may be the point of the film. More emphasis was put on Rikka and Yuta evaluating and assessing their real world relationship rather than the one based on their chuunibyou counterparts. With regards to the real world aspect. Kyoto Animation have also thrown in a few Easter eggs and references with regards to the locations the characters visits and the things they see there. Most notably referencing their past shows like Tamako Market and such. Its a nice little thing they've put in there for fans.

Another aspect that should be noted about the film is that it's very focused on Rikka and Yuta's relationship with the side characters getting very limited screen time or presence in the film. We do see some rather comedic scenes with Dekomori and Shibutani when they are chasing after Rikka and Yuta but other characters such as Kumin appear rather sporadically and don't really offer much in ways of plot. Making the film follow a formulaic approach of the main couple arrives somewhere, spends time together, runs into pursuers, evades them and moves on to the next location. Making the comedy revolve around the fun things the couple do and chat about then followed by how they can evade their pursuers. In terms of jokes there weren't very many laugh out loud moments, a few small laughs here and there but most were from seeing a reference. To tie into this I watched the film with the English dub. It's passable. Not great. Not bad. Just feels like the bare minimum needed in order to dub it.

Overall Love Chunibyo and Other delusions: Take on Me is not the grand climactic end to the franchise you may expect. But it is a rather nice end to wrap things up. The problem is it reminds the viewer that the main conflict was already done in season 2 and that the first season of the show is still the highpoint of the franchise. Making the film a nice one while it lasts but not one that will be remembered or will stick in your mind. One that will be gone, in a day or two after watching