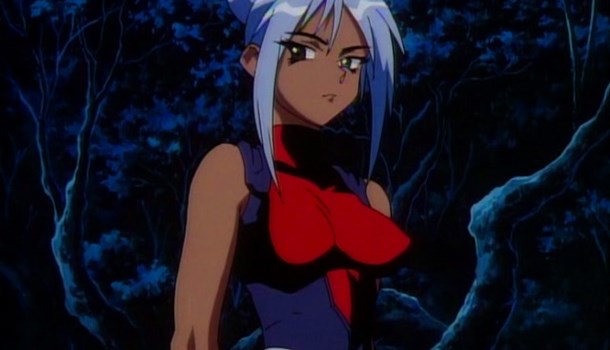 Take several of possibly the worst named characters in anime history, put them in an overdone world of modern technologies mixed with a farming lifestyle, and you'll have a pretty good idea of what Landlock is.

Landlock follows the adventures of young Luta, a blue eyed, but otherwise normal teenager living in a tiny village. His father, a rural-priest figure, has the power to control the wind, and because of this many of the land's rulers are out to gain this ability in order to achieve domination over the world. Although this may sound exciting to some, there is very little action, and despite being done-to-death, they even managed to slip in some of those terrible Star Wars-style "YOU'RE NOT MY REAL FATHER!" moments as well, and with it's overdone technological vs. agricultural aspect, it truly is a forgettable experience. To add to the unremarkable aspects, the dub is one of the most lacklustre I've ever heard, even surpassing the likes of Firetripper in it's badness. On top of this, the plot seems all but a mess until the end, where one minor character explains it all to us in the matter of 30 seconds.

The animation, though hardly stunning in any way, is above average for a TV series but a little sub-par compared to OAVs of the time. The little action scenes that are actually in there usually consist of repetitive explosions followed by static images. It makes you wonder why they even gave this a 15 certificate at all, as there is little to no swearing, and the violence is so tame that it's no worse than the usual daytime Sci-fi stuff you see on the BBC. Thankfully though, the colours are vibrant and the visuals are crisp and clear, giving it a much slicker look than other titles on the "Manga: The Collection" range. The futuristic vehicles and the like are standard stuff, with the character designs typical Shirow, from the distinctive eyes to the sublime attention to detail. A shame though that the anime dumbs down the designs, and in doing so lose a lot of the charm. The backgrounds, while not outstanding, do their job better than most, and thanks to some intricately detailed scenery, this stands slightly above the usual OAV standards, and is far superior to the sort of backgrounds you would find in a TV series.

I'm not sure if it's the unoriginal dialogue or inexcusable bad dub that put me off, but one things for sure; this anime is eye candy and nothing more. It;s certainly not what I've come to expect an anime produced just a few years ago. Spend your £9.99 on a DVD like Amon Saga, it may not have a good dub but at least you have the sub as a handy extra.

4
Nice to look at, but with a dub this bad and a pretty unremarkable plot, you should give it a miss.
LATEST REVIEWS