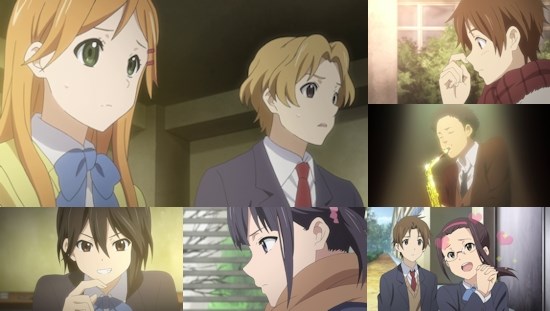 Anime licensing can be a strange beast at times - we've recently seen some licensors pushing back against the growing expectation of shows being released as full season and half-season sets out of a desire to return towards selling series across multiple volumes. Another odd development of late has been seeing some OVAs sold separately from the series they went hand-in-hand with during their Japanese home video release - Girls und Panzer suffered a little from having its frivolous bonus shorts split from the main series, and now Kokoro Connect sees its final story arc hit DVD away from the rest of a show which we've already devoured and loved here at UK Anime.

Along those lines, these final four episodes are very much a case of "as you were" for the series - the cast and qualities of the series remain the same, but with a different "gimmick" to push things along. This time around, the nefarious Heartseed has landed our five Student Cultural Research Club members with yet another strange phenomenon; this time around, the group find themselves randomly transmitting their inner thoughts to one other no matter where they might be or what they might be thinking.

There's never a good time for a teenager's inner thoughts to be laid bare at the worst possible moments, but in this particular instance the timing is especially painful as it coincides with Valentine's Day and some troubled times for Taichi as his relationships with Iori and Inaba come to the fore. Already suffering on account of her self-doubt regarding her true personality, it's arguably Iori that takes the brunt of the strain which results, although with the other members of the club also having to balance their own personal problems with the possible closure of their club there's no shortage of stress to go around. Things come to a head when some dangerous individuals threaten far more than simply the future of an after-school club - but then again, perhaps this is exactly what the gang need to reunite them?

Although its drama heads into some pretty overblown territory across the course of these four final episodes of the series, it's still a strong story arc that builds upon the likeable personalities and enjoyable clashes between them that sits at the core of Kokoro Connect's story. Thus, this isn't some frivolous OVA that you can easily skip, as these episodes are part and parcel of the show as a whole, and are must-see viewing for anyone who enjoyed the TV series. This story arc also gives us a pretty feel-good finale to events - nothing is resolved in the grand scheme of things, as per so many series based upon ongoing light novels, but it still makes a decent fist of underlining its television outing.

In terms of any commentary with have of this release, it really is that simple - if you enjoyed the TV series you'll get just as much enjoyment out of these four episodes, but if you were lukewarm to the show this OVA won't redeem it for you. For our part, this is another greatly enjoyable piece of the whole, and much as we wish it could have been bundled in together with the release of the series proper this final story arc is worth the additional outlay required to pick it up.

Beyond that, this is a solid release - the English dub still isn't all that great, making the Japanese language version the preferable viewing format, and the lack of a Blu-ray edition is a shame but not a disaster for a show that isn't exactly the pinnacle of the animated form even if it does hold a nice, colourful aesthetic. Subtitles remain strong for the most part, so unless you're completely against the idea of buying on DVD in this day and age then we have no complaints here.

We might not be big fans of splitting out one story arc from the rest of the series, OVA or not, but licensing quibbles aside we can't ding this Kokoro Connect OVA collection - it's more of a series we've enjoyed hugely, and it has more than enough in its arsenal to continue strongly from where the mainstay of the series left off. If you like your slice of life high school series to have some needle, drama and a surprisingly considered take on the worries that plague the average teenagers mind, then Kokoro Connect is worth every penny no matter how many releases its split across.

8
Some of its drama is overblown, but these final episodes of Kokoro Connect remain vastly entertaining, and are a must-watch for anyone who enjoyed the TV series proper.
LATEST REVIEWS