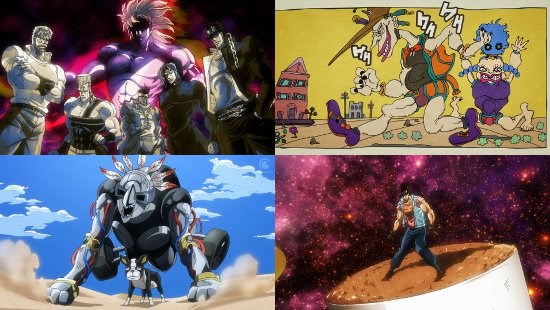 Disclaimer! If you have not watched any of JoJo’s Bizarre Adventure before now, this is not a good starting point! I would heartily recommend skipping back to the first part of the Stardust Crusaders series, or back to the start of the whole franchise’s recent anime run, if you have the time available.

Also, if you have listened to the UK Anime Network podcast recently? (Of course you have, right?) If so, you know my thoughts on this series already and can guess what the rest of this review will say. With all that out of the way, lets do the actual review, shall we?

Kujo Jotaro, the impossibly tall and buff high school student, finally arrives in Egypt after spending the previous series bumbling around trying to get there. With him are a posse of other interesting characters - his grumpy grandfather, an Egyptian fortune-teller, a French idiot, a schoolfriend and a new addition, an asshole dog. They all have the power of the STAND, a psychic projection of themselves with individual special powers! Jotaro’s mother Holly has one too, but cannot control it and it is slowly killing her. To remove this curse they have to kill Dio, a monstrously powerful and attractive vampire who still survives from the Victorian era and is now living in Cairo. Other STAND users in the thrall of Dio, each with their own interesting powers, will try and stop the group and must be pushed aside in order to vanquish the foul vampire and save the innocent Holly from certain doom.

While this is atrociously reductive, this series of Jojo’s is more of the same. This is not meant in a negative fashion - what is present here is more of the same exuberance, love, and respect for the source material that has made the previous seasons of the show such an outstanding watch for both crusty manga-readers like myself and new fans who get to take the utter madness of the franchise full on the chin without any headgear. David Production get JoJo’s and this care and knowledge of the material is plain to behold, translating all the of action, the absurdity, the humour and the outright mania into the animated format in a way the brings out the best in it. The pacing is core to this, taking care to bring the best out the original material with all the reverence of a super-fan but without any of the possible delusion or over-enthusiasm that could have snuck in to spoil the broth. Nothing has been abridged, and the fact that all of it is entertaining is testament to how well it has been handled.

Now that our heroes have had their powers and personalities fully established, and all the easy low-hanging-fruit powers that the enemies could employ have already been used, the series moves on to more bizarre (see what I did there? Eh? Eh?!) and intricate enemies for Jotaro and crew to fight. In particular, the way the series jumps to the opponent’s point of view to show their side of the fight and how they are deducing what the heroes are doing makes for gripping encounters. Sure, you will sometimes get a wee bit too much exposition about how these different people try and outsmart each other, but it makes it a fascinating watch, leaving you sat there going “Well, how are they going to get out of this pickle then?” The series also never forgets to throw in some humour, laughing either with or (more likely) at our hapless heroes. The sheer conviction with with the show presents itself and the conflicts that erupt within go a very long way to covering up a lot of “hey, wait a minute-” moments in the series when dumb things happen, as you know it is all done for the sake of sheer entertainment.

Both the audio and the visuals goose this with some wonderful flourishes, knowing when to screw with the image or deliver an arresting effect to rachet up the tension and drag you into what is going on. The crazy use of perspective and colouring in particular helps to keep the fights strong and engaging, really delivering on the “bizarre” part of the name and making the whole thing feel fantastical, even when you could quite easily boil what is happening down to rather simple actions.
Of particular note has to be given to the voice acting in the series - the voice talent just sells the show and the enthusiasm is infectious, whether it be rather brazen "Engrish" from Joseph or a creepy evil child’s choking laugh.

I love JoJo’s. It is the highlight of my week. Sure, it has a lot of rather dumb coincidences and plot conveniences, but all of it is for the good. It also has some less savoury adventures with gore which I’m not going to excuse, so perhaps stay away if you are very squeamish. If you want the true pinnacle of fighting shows without any annoying filler or unending charging up, you have found the right series.