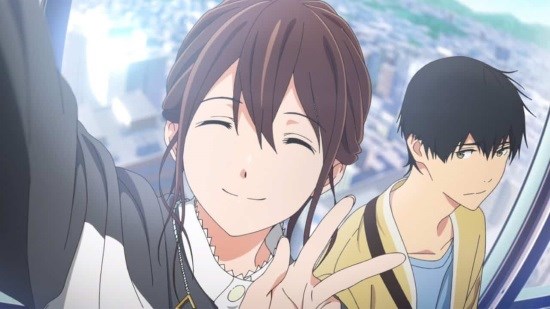 I Want To Eat Your Pancreas (Theatrical Screening)

Tears are falling at Scotland Loves Anime. They're glistening in the light of the credits I can’t see them myself of course because I'm too busy crying and the halation of the words on the screen are making the credits unreadable. But I can hear them, the rustling, sniffling silence is deafening in the aftermath of the film we’ve just witnessed and I think that if Seb wipes any more tears on his jeans, they will go transparent.

The film in question that has created this weird set of teary circumstances in an audience full of adults is the bizarrely titled I Want To Eat Your Pancreas from Studio VOLN, which premiered at Scotland Loves Anime 2018.

Haruki is a bit of a social recluse and has a rather unique form of social anxiety. He is purposefully socially isolated so as to keeping everyone at arm’s length. Haruki does participate in school but has had no friends, relationships or contact with people which might force him to open up and be hurt. However, his quiet existence is about to be shattered when a hyperactive whirlwind named Sakura careens into his life and takes charge. She’s vibrant, open and passionate – everything he isn’t and she won’t take no for an answer as she determines on a whim that Haruki is her new friend, closer even than her best friend Kyoko. This is because Haruki has learned by accident (or possibly by providence) her secret and Haruki is perhaps the perfect individual to keep it. After all, who is he going to share her secret with? This secret is, Sakura is dying from a severe disease of the pancreas, which while being treated is terminal. There's nothing to be done to save her life and it is now up to Haruki to be her friend up until she dies, no matter how briefly she’ll be there.

I Want to Eat Your Pancreas is a film that has a story that's almost as big as any trope in anime: boy meets girl and girl is secretly dying. Roll on life lessons, character growth and soppy ending where the lead character dies. The thing is that the film understands you all know how this story goes even before you start watching and starts to subvert your expectations. The film opens onto Sakura’s funeral with her devastated friends breaking down in tears before her picture and her shrine. Rather than attempt to keep the audience or characters guessing, everything is made apparent right from the outset allowing the focus to be purely on the interaction between its two leads.

The pairing of Haruki and Sakura is a wonderful thing. Supported by a brilliantly witty script that will have you in stitches, the characters seem almost to brush aside what would be the spectre of looming death in any other anime. Rather than moping around over her illness, Sakura is desperate to live her life to the fullest and experience everything she can. She uses Haruki to help her check off a bucket list as she doesn’t want anyone else to know about her secret as she doesn't want her interaction with her friends to change. As a newcomer who already knows her secret, Haruki is someone she can be much more open and daring with and the two form a bond which moves past the romance the audience expects into a much purer relationship, with some bumps along the way.

The directorial debut of Shin’ichiro Ushijima, previously only working as an episode director on episodes of Death Parade and (believe it or not) One Punch Man, the film is a beautiful adaptation of Yoru Sumino’s original novel. The character designs are cute and fun if a little too matched to their characters’ roles, and the animation from Studio VOLN is beautiful; especially in light of the fact this is their first theatrical production and that the two series they’ve produced are the decidedly average Idol Incidents and Ushio and Tora! As the story progresses everything keeps pace perfectly with some brilliant visual touches: here, a stunning fireworks sequence; there, a simple expression passing across a character’s face. In the lead roles Lynn as Sakura and Mahiro Takasugi truly impress here. Whilst Sakura is the character who arguably develops the least throughout the film, in Lynn’s hands she's still utterly charming and lovable. Despite the fact that her fate is sealed within the opening seconds of the film you cannot fail to care for her. At the same time Takasugi brings Haruki to life taking him from being a near-monosyllabic book worm at the film’s start through a journey to becoming a more rounded character willing to take risks and truly open himself to others.

Bar a few moments of slightly dodgy CGI there's so little to find fault with here. I Want To Eat Your Pancreas is wickedly funny, utterly engaging and then, after you feel like the film has gone so far from the expected path that it’ll never get you….it gets you. It gets you hard and once we catch up to the film’s opening, the film sneaks up behind you and finds a way to bring the emotional framework that it’s been delicately constructing, almost unnoticeably in the background to the fore and…well…it hits home. Hard.

The tears are falling at Scotland Loves Anime.