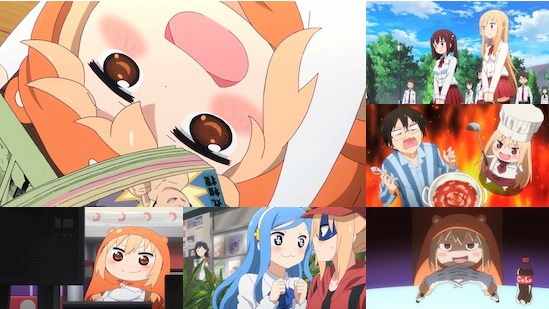 As any anime fan that embraces social media will undoubtedly know, every season seems to breed at least one show that turns out to be an endless source of GIFs, memes and images. In the summer 2015, that series was Himouto! Umaru-chan. Even if you’ve never heard of the series by name before, you’ve probably seen at least one image of a small goblin child in a hamster hoodie drinking, playing video games, surfing the Internet and/or drinking copious amounts of cola. The show’s popularity speaks for itself, having been recently confirmed for a second season arriving later this year.

Umaru Doma seems like the perfect high-school girl - beautiful, popular, intelligent and athletic. However, much to her brother Taihei’s dismay once she gets home she turns into lazy layabout, spending all of her time online, reading manga or playing video games. This personality change is so drastic that it’s also shown visually, with Umaru transforming into a chibi version of herself when at home. As the hard-working Taihei tries helplessly to turn his sister into a functioning member of society, Umaru uses her secret persona to strike new friendships with her fellow classmates.

From just the first episode alone it isn’t hard to see how Umaru became anime’s newest champion. Many viewers will surely be able to relate to the notion of having to play down their love for anime/gaming around others, so will quickly find a kindred spirit in Umaru’s double life. It’s this common ground that makes Umaru-chan’s otherwise simple premise not only work, but stand out from the barrel of other comedy anime that follow the same vignette-style format. Quite often it’s not necessary to break the mould providing you can fit it perfectly, and this is a mindset the show boasts very confidently. The jokes are all well-timed, the art is bright and colourful and once that ear worm of an opening theme hits you’re unlikely to get it out of your head any time soon. Put simply, Himouto! Umaru-chan is a near-perfect little package that encompasses the best of what this genre has to offer.

However, while Umaru may be the star attraction, she doesn’t cast a shadow over the other great characters that populate the show. As well as her ever-patient brother there’s also her school friends Nana, Kirie and Sylphynford - each of whom interact with Umaru in different ways. Shy Nana is her best friend who has no idea about Umaru’s alter-ego, while the even shier Kirie longs for a friendship with Umaru but can only pluck up the courage to talk to her secret persona (who she mistakes as a completely different, younger sister). Sylphynford is in a similar position, sharing a one-sided rivalry with Umaru at school but striking up a friendship with UMR - the identity Umaru takes when competing at gaming competitions or visiting similar attractions, again mistaking her for an entirely different person. The fact that they all engage Umaru under different personas keeps things interesting, and through this we get to see a different side to them as well as just the title character.

On top of its own comedy and great cast of characters, Umaru-chan also has a wealth of parodies, homages and references at its disposal as well. With sources ranging from the likes of One Piece, Street Fighter, Evangelion and Vocaloid (each with their own hilariously slightly-altered name), Umaru-chan certainly casts its net wide to ensure there’s something to appeal to everyone. This might suggest that only those with wider otaku knowledge might get the most out of Umaru-chan, but thankfully these are the kind of Lucky Star-style references that tap into the really fine trivia – they’re ones can be appreciated with only passing knowledge of the source material. I’ve never seen a single episode of Terra Formars (lucky you! - Ed), but seeing a reference to it crop up still managed to get a chuckle out of me.

But as relatable as the shut-in otaku version of Umaru may feel, what consistently lets her down as a character is that the series only ever toys with idea of having her grow as a person. While you can certainly argue that her attempts to bring Kirie out of her shell suggest that she does possess some level of selflessness, her relationship with her brother skirts the line between funny and frustrating. Again moments such as one where Taihei gives Umaru an allowance to buy nice clothes only for her to return with cheap clothes and an expensive video game are relatable (who can honestly say they’ve never done something like that?), but happen too often with very little respite. On the rare occasion Umaru does have some sort of realisation about how much her brother does for her and shows/does something in return, the episode immediately ends and/or it’s treated as a joke. Umaru’s self-centredness might be easier to swallow if Taihei wasn’t equally as likable, but you just can’t help but feel for the poor guy and wish he’d put his foot down a bit more forcefully.

This release is also particularly special thanks to its bonus features, which stretch far beyond that of just the usual textless opening and closing. Also featured here are twelve additional shorts, “Banquet Monday” specials as well as subtitled audio commentaries for each episode with the Japanese staff and voice actors of the show. At only twelve episodes Umaru-chan is one of those shows that feels like it’s over just as soon as you’re properly getting into it, but this wealth of extra content means there’s still plenty to enjoy as you begin the wait for the second season.

The plot is fairly standard and it doesn’t reinvent the wheel when it comes to comedy, but Himouto! Umaru-chan is just a thoroughly enjoyable series that knows what it’s good at and sticks to it. The set-up works perfectly, the characters are wonderful and the genuine love for all things geek tie it together in one great little package. While she may be annoying at times and certainly isn’t any sort of role model, arguably there’s a little bit of Umaru in all of us.

8
All hail your new nerd queen.