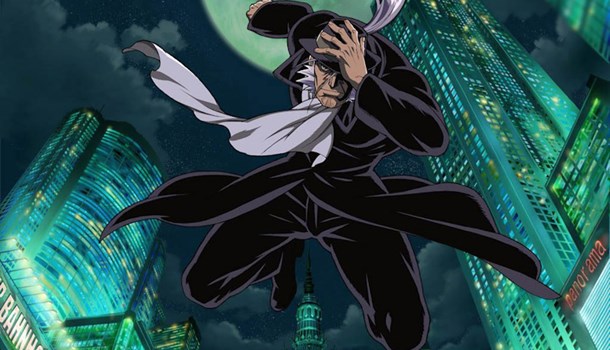 When you create a series you need to have a balance of both good writing and production and a good and consistent art style. Ghost in the Shell has it, whilst AD Police doesn’t in all respects. The judgement is just that swift.

It’s always a matter of opinion of course, but I find that the majority of series released tend to swing one way or the other. I could happily list quite a few which fit the pattern of having either one, or the other, or in some cases both, but making judgements that glibly would cause many people to publicly flame me as well as endanger my life. Since I enjoy the company of my genitalia, I will stop with this line of discussion.

So the question is: which way does Heat Guy J swing? Is it one of these top notch shows which cover both excellent writing and quality, or is it another bottom feeder? Read on to find out.

The initial premise of the show is quite simple. Its set in the future; can’t go wrong there. The futuristic city closely resembles Hong Kong and cybernetics and artificial intelligence technologies have been mastered. These AI’s are officially banned from entering the territory with the exception of one, J. The term artificial intelligence is loosely applied to J, as AI would mean some form of personality, which J lacks. He is protective of his partner and they both form the main combat and protection wing of their government department. They are, in essence, peace officers and it is their job to keep the peace and to prevent crimes involving individuals who have been augmented by cybernetic technologies.

This job incurs quite a lot of danger and, as inted at by the title of this show, J forms the main combat role in the department’s enforcement operations. In short, he kicks major arse. And for an encore, he will blow steam out of a secret orifice once this arse kicking has been completed. Quite simply if there is a danger to his partner, he will jump out and gun down the offending party. This I like. I am a man who enjoys some decent action, but there are times this is just not enough. (See: GitS: SAC)

In terms of the stories, the show mostly consists of a series of semi-independent episodes with a connecting arc. So far there is hint of an overall back story involving a sadistic little son-of-a-mafia-boss angsty bishie teen (what a mouthful!), but apart from this budding plot, little evidence has been shown for consistency in the individual stories other than the occasional follow-on stories, such as episodes 3 and 4. I can happily deal with this, but as you may have gathered from my other reviews, I am a man who likes his series with major story arcs. I have only thus far seen the first eight episodes so I can't really judge.

One of the big letdowns is the characters. So far I've found all the major characters to be very two dimensional and devoid of any likeability. In terms of their longevity, they have none. It is safe to say that if I didn’t watch the episode 10 minutes ago, I would not remember their names or personalities. For this series, it has to be said that the major flaw was character development. They completely lack depth and have generally unbelievable character traits. One such trait that I feel should be mentioned is the politeness of the android J. It is quite clear that his personality is based very strongly on the character Data from Star Trek: The Next Generation. This isn’t a bad thing in general, but for a show of this nature it is woefully inadequate and continues to highlight the overall poor concept of the character personality and development.

Art. This is where the show wins medals. It’s beautiful. The quality of the artwork easily matches rival shows such as Ghost in the Shell, and in some ways puts it to shame. Using a combination of well rendered CG and cell animation the show delivers an eye-catching performance in both the general feel and the

7
Beautiful and action packed, but not much else.