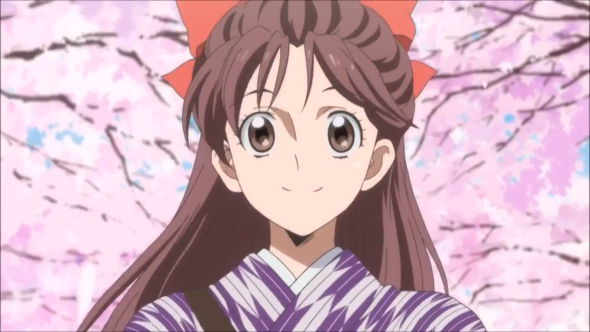 Every year at Scotland loves Anime there is always one film that genuinely surprises me. This yearly tradition falls squarely on the film Haikara-san: Here comes Miss Modern Part 1. Before seeing this film I knew only three things about it: its name, that it was a shoujo romance and that it was set in the Taisho era of Japan. Like all other films of the festival, we the audience were treated to a brief introduction of the film poignantly delivered by Mr Jonathan Clements. In which he gave a brief overview of the film and detailing it's source being from a manga first published in 1975. From this it can be seen that this would be a classic shoujo style movie.

To begin with Haikara-san: Here comes Miss Modern is set in the Taisho era of Japan and revolves around a 17 year old girl called Benio Hanamura; the titular Haikara-san/Miss Modern. Benio definitely plays up to her namesake of being a modern girl here. As the film takes place the 1920s many of Benio's thoughts and actions can be seen as unconventional and completely go against the social norms of the time. While she is enrolled in a finishing school in order to become a better bride, she objects to the idea of arranged marriages, and for women to be docile and stay at home. Instead she actively speaks her mind; mostly pertaining to her wanting to go out and find her own love rather than let other people dictate her life for her. She is also very tomboyish, choosing to ride a bike to school, practising kendo instead of doing what is expected of her in the times social climate. This all takes a drastic change when she is suddenly forced into an arranged marriage and becomes the fiance of a young soldier Shinobu Ijuin. From this she tries everything she can think of to call off the arrangement. However as with most shoujo romances, we see her start to develop feelings for her suitor as well as some serious events forcing her to make drastic and difficult decisions that will have a huge impact on her life.

From the synopsis and from the presentation of the film, it is very typically shoujo romance to the point of being cliché. However given it's origin is from a 40 year old manga this aspect is a given. That being said, Haikara-san takes these shoujo tropes and cliches and blends them together into a very cleverly executed package. For two thirds of the film, things are very light hearted and comedic providing great moments that help the audience understand Benio's character, way of thinking and how this goes against society at the time. Benio is an instantly likeable protagonist thanks to her outlook on life, strong will and fun loving personality. She is a person who wants to make her own destiny rather than sit and wait for things to happen. She'll be outspoken about things that she has issue with and won't miss the chance to express herself in a way that was unheard of at the time. At first this is were the main comedy of the film comes into play showing the situations Benio gets herself into thanks to her very different attitude to society compared to everyone else around her.

While the film can mostly be seen as a comedy, near the end of the film things take a very dramatic and almost soap opera like turn of events that further highlight Benio's strong resolve, tenacious attitude and unorthodox for the time period approach to handling a very difficult situation. The reason why this all works so well is that it feels like a natural progression for the character to act this way in this circumstance, whilst the events may come out of left-field in order to play to the Shoujo stereotypes it works and delivers a rather interesting and shocking cliff-hanger that will act as the lead into the part two (which was just released in Japan at the time of this review).

With regards to the film's handling of tropes, it manages to cleverly subvert other ones. There were parts in the film were I was worried the story would devolve into a love triangle both as two women loving the same man, and two men loving the same women. Thankfully each of the characters involved realised this kind of thing would be pointless and decided to pursue something new instead, which really speaks to the strength of the character and the writing involved. The film manages to handle these clever tropes and makes the romance aspect seem rather natural and fun.

While the film may be based on a classic story that has been redone for the modern anime viewing audience but adhering to the source material, it is somewhat refreshing to see this kind of film that falls back on conventional shoujo tropes and have a good strong female lead. Also as stated previously this was a film I knew nothing about and had no expectations going in. Yet this film will stick with me as it left a huge smile on my face and a desire to see how the second film and end of the story plays out. A classic throw back to classic shoujo that a modern audience will enjoy.

9
A charming throwback to classic shoujo for a modern audience