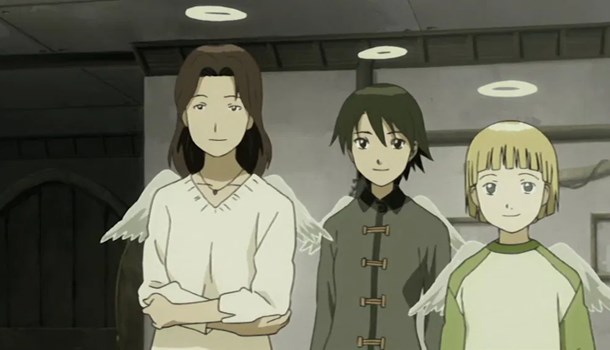 I was not sure what to expect with this series. After watching Abe’s previous series Niea Under 7 at a NanimeW meet and finding that I liked the style and the series, I thought I would think fondly of this series. Due to my laziness I missed the earlier episodes and started at episode 8 and watched onwards. I found Haibane Renmei likable, but not overly entertaining and eventually I found myself avoiding it. But, through recommendations I decided to give the first and second volumes a go. It all makes sense to me now.

So in terms of what happens, well, not much to be honest. Rakka begins her spiral of depression after the departure of one of the Haibane. You learn a bit more about their world and the pasts of some of the characters and you get to feel all the interestingness that the characters give out simply by interacting.

As Ross mentioned in his review of volume 1 , the musical score really does fit the bill here. In terms of conveying emotion and the atmosphere of the moment it works excellently. I felt almost completely relaxed during the entire 3.5 hour sitting of both volumes.

Normally this series is not what I am into. I am a self confessed junkie of most things mecha and science fiction. But, overall, I am enjoying this series a lot. Since I do sort of know what is going to happen the suspense factor is lost, but it is still strong enough to break into my student loan and dig my debt hole deeper.

I think I want to continue this, and re-watch until the end with some firm character development and context to assist me. I do want to see if the little shards of hope and story that are present in this volume blossom and shine, cause honestly, I was too drunk to remember the first time.
8
Intriguing and worth a watch