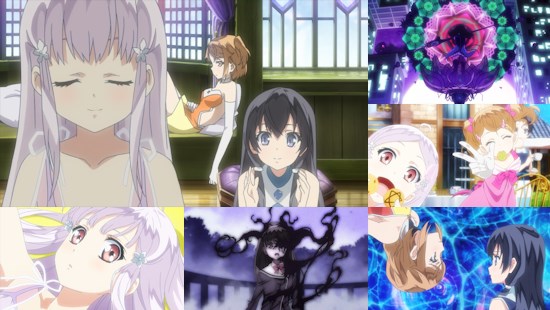 Human life may be little more than a pinprick set against the life and size of the universe, but nonetheless even our short time so far on the ball of rock we call home has given birth to a wealth of history - stories both grand and all-encompassing and miniscule and personal in scope.

With so many experiences and moments of beauty residing within that history, it's hardly surprising that humanity wants to archive and protect it all - a task reserved in this world for the Box of Wisdom, a huge database collecting (or "backing up", if you prefer) various eras, locations and scenarios to preserve them and the experiences they represent forever. Protecting this database are two artificial intelligence anti-virus programs named Dual and Dorothy, tasked with identifying any viruses that might make their way into the system and deleting them with extreme prejudice.

However, something odd seems to be happening within the Box of Wisdom. For starters, whenever Dual or Dorothy enter one of the scenarios backed up within the system they find themselves placed into those tales as a main character - a friend or relative of an individual who normally turns out to be the corrupted source of the virus infection requiring deletion. However, this is nothing compared to the sudden appearance of a strange girl *outside* of one of these scenarios - she isn't a virus, so just who is this individual who calls herself Remo, and what is her role within the system?

Remo's existence is all the more confusing as she exhibits all manner of entirely human traits - she likes to cook and eat food for example, neither of which are a requirement for her new anti-virus hosts. There's something charming and comforting about Remo's behaviour that draws Dual and Dorothy to her however, and before we know it the three have forged inseparable bonds. Anti-virus work begins to play second fiddle to exploring the vast number of eras and settings at the trio's disposal, allowing them to experience the full gamut of the human experience, from the simple pleasures of everyday existence through to the horrors of war and natural disasters. This kind of happiness can't last forever though, and the truth of the world outside of the Box of Wisdom is about to intrude on life within this virtual world markedly...

If there's one thing to be said about Garakowa -Restore the World-, it's that it's packed full of interesting ideas - its virtual database of human history is an intriguing conceit that is ripe with all sorts of story-telling potential, as is the way that Dual and Dorothy react and learn about their human overseers from access to that database. Similarly, the state of the world outside of the Box of Wisdom is clearly ripe with possibilities - we're introduced to the idea of a future where the planet is overseen by an environmental control system named ViOS, but what impact has it had on the Earth and its populace?

Unfortunately, the one hour running time of the film isn't anywhere near long enough to properly explore any of these facets of the story, and Garakowa thus feels like a concept that would have functioned better as a TV series. By far its most powerful moment is a long montage devoid of dialogue that allows us to follow Remo, Dual and Dorothy through myriad eras and locations stored within the Box of Wisdom - a fantastic whistle-stop tour through human life from famous landmarks through to the horrors of World War II, accompanied by our view of the happiness and sorrow that the trio experience as they make their way through each and every one. It's a simple yet beautiful moment, both in terms of its emotional payload and its narrative simplicity, and it's an example of the film at its most coherent.

Beyond this, things are rather more muddled - we get our pay-off around what happened with the population of Earth after the introduction of ViOS, but it feels too indistinct and wishy-washy to resonate with the viewer, and similarly Remo's story is never focused enough in its final act to provide the punch that the climax to the story needs. What should be heart-rending thus ends up simply feeling mildly sad, and the requirement for the viewer to pick over everything they've seen to assemble a coherent picture of what has transpired only further removes you from any emotional pay-off. What is here is interesting, but there's so much left unsaid of unexplored that we can't help but be a little disappointed by the result.

Where Garakowa does hold together far more satisfyingly is from a visual perspective. Thanks to the influence of From the New World director Masashi Ishihama at the helm of this film it's full of great imagery and style, most notable in the corrupting effect of viruses upon the film's world - perhaps the most notable similarity to some of From the New World's grislier moments. We'd be the first to admit that it doesn't have the kind of top-level animation quality of other theatrical anime releases, but its aesthetic is more than effective and it's a delight to drink it in for the hour or so that you spend watching the film. Add some strong music into the mix, and there's a lot to be said for the overall experience of viewing Garakowa even when its narrative is fighting a losing battle with its short running time.

It would be both harsh and reductive to suggest that Garakowa -Restore the World- is an example of style over substance - there is substance to the movie, it just doesn't have anything like enough time to fully deliver on the concepts and premise that it sets up. It's this that makes the film frustrating - it has a decent cast of characters that you find yourself invested in, but their story is given short shrift and boiled down to a few emotional high points that don't have the same impact when they lack compelling context. The result is a fail worth checking out from a stylistic perspective, but one that may end up leaving you cold from a narrative point of view.

You can watch Garakowa -Restore the World- in streaming form on Crunchyroll.

6
A stylish film with great ideas in its arsenal, but insufficient time to deliver upon them.
LATEST REVIEWS