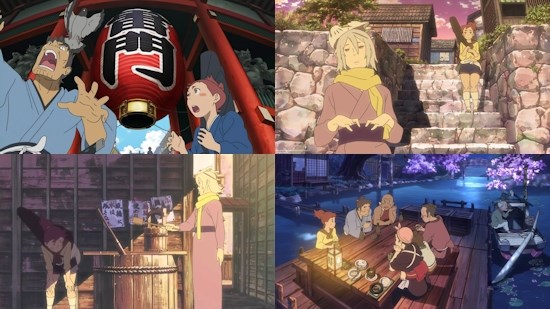 If there's one anime title that will catch the attention of even non-anime fans its Spirited Away, so with that in mind a project directed by the assistant director under Hayao Miyazaki for that seminal movie is the kind of thing that seems a perfect fit for Scotland Loves Anime - particularly when said director, Masayuki Miyaji, is willing to come to Glasgow to talk about his work.

Based on a book which has also had a manga adaptation, Fuse: Memoirs of a Hunter Girl is an attempt to bring this source material into an animated form in an easier to comprehend and more entertaining fashion - more on that later, of course. The story follows - as the title suggests - a young hunter girl named Hamaji, who lives in the mountains and is nothing if not impressively proficient when it comes to tracking down and killing her prey. Living alone after the death of her grandfather, Hamaji jumps at the chance to visit Edo at the behest of her brother, and thus makes her way to this bustling city that is a far cry from her largely solitary normal life.

Upon arriving in Edo, Hamaji's attempts to find where her brother lives (not helped by her inability to read) leads her to learn of a major concern facing the city's populace at present - the presence of so-called fuse; half-human, half-dog hybrids that go around eating the life-orbs (or souls, effectively) of the human populace. In light of this danger, an open season has been declared upon the eight fuse, with a bounty on their heads leading to a rush of samurai trying to catch and kill one of these beasts to earn themselves both a fortune and a place in legend.

Needless to say, Hamaji's brother is just one of these people, and he's invited his sister along in the hope of using her hunting skills to track down one of the two remaining fuse. For the wide-eyed Hamaji however there's far more than merely killing and earning some money to take in, as she learns some important life lessons and also finds herself befriending a good-looking but mysterious man named Shino.

Even from this brief synopsis you can probably tell where the film ultimately ends up heading, and you'd also probably be right - surprising the audience really isn't one of Fuse's strong suits. Similarly, character development isn't exactly something that this movie seems to have gotten a handle on either - to be fair, Hamaji does grow and learn through the course of the movie, but there's nothing remotely believable in the growth of her relationship with Shino, and none of the supporting cast really offer much aside from simply serving as additional foils for Hamaji to bounce off in some shape or form. In a similar vein, the film's comedy is also pretty repetitive, consisting of slapstick which is amusing here and there but threatens to become tiresome when it's the sole means by which Fuse can get a laugh from the audience.

On the plus side, the film does an impressive job of building up its rather unique view of Edo, blending an unerring eye for detail one moment while taking huge liberties with the period's history in the name of spicing things up the next. It's a juxtaposition of elements that works incredibly well throughout, particularly when coupled with the movie's enjoyably bustling depiction of this busy city, particularly when offset against the wide, lonely expanses of mountain living at the start of the film. There's nothing all that outstanding about the film's visuals on the whole, with simple character designs that are functional rather than beautiful, but this is made up for by some nice moments of energy and movement when required.

Overall, perhaps the biggest failing of Fuse: Memoirs of a Hunter Girl is that there isn't all that much to say about it - it's just about entertaining enough to justify its existence and running time, but by the time you've left the cinema chances are you'll have forgotten any moments that particularly caught your eye, such is the fleeting nature of a film that doesn't really have very much to say for itself. This leaves us with an okay piece of entertainment to while away the time, but nothing enduring or worthy of multiple viewings.

Fuse: Memoirs of a Hunter Girl was screened in Glasgow and Edinburgh as part of Scotland Loves Anime 2013

6
Its take on Edo is an enjoyable one but there's nothing that stands out in Fuse's character development or story-telling, leaving us with an unspectacular movie.
LATEST REVIEWS