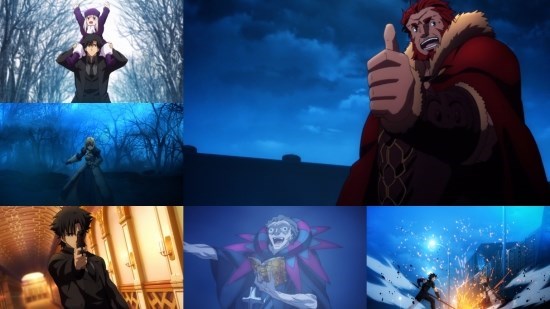 Back when Fate/Zero was streaming in 2011, there were those among us here at UK Anime who were pleasantly surprised that it was available to international audiences so quickly. A home video release for the UK still seemed almost too much to hope for at the time, but now that it’s out on both standard DVD and Blu-Ray formats it makes up one of the highlights of the 2014 release calendar.

This collection contains all thirteen episodes of the first season, so offers the same experience that the original broadcast did... right down to the edge-of-your-seat cliff hanger and the resulting feelings of impatience for the second half when it’s over! For those unfamiliar with the Fate/Stay Night TV series and the alternative retelling Unlimited Blade Works feature film (currently available from MVM Entertainment and Manga Entertainment respectively), the events of Fate/Zero take place during the previous Holy Grail War that occurred a decade or so earlier.

Its status as a prequel does, however, mean that if you’ve not dipped your toes into the Fate franchise before, you should be warned that a number of plot points and revelations about certain characters’ identities may constitute spoilers to you. On the other hand, all this occurs before the events of the series and feature film that are already on UK shelves, so it may be an appropriate starting point.  The premise was outlined in more detail in our initial review of the first four episodes during that initial streaming broadcast, but this collection takes those opening moves of the Fourth Holy Grail War further right up to the series’ midpoint.

We’re treated to the initial confrontations between the seven magic-wielding Masters and their respective Heroic Spirit ‘servants’ who form the (mostly!) two-person teams who compete in the War for the prize of the Holy Grail and its promise to grant the winners any wish that they desire. The rivalry between Kirei Kotomine, the Master participating on behalf of the Church and Kiritsugu Emiya, the renegade Master with ideas of his own yet supported by the von Einzbern family, is established; so too are the uneasy relationships between the other five Masters/Servant teams.

The character dynamics are what propel the storyline forward, being as it is a heady mix of magic users of varying proficiencies and motives who are supported by some inventively re-imagined figures from myth and legend. The Servants of course have wishes of their own in addition to their combat skills being given supernatural enhancements, so quite often their charisma, combat abilities and strength of personality outshine the humans they fight alongside.

Apart from some new faces in the cast of characters, the setup is the same as the Fate/Stay Night visual novel, its television and cinema adaptations, but the production values help this adaptation stand up well in pretty much every aspect. Visually, it’s sumptuous: the colour palette is dark and moody or bright and shimmering to suit the scene, the battles play out with fluidity that’s spectacular by TV-budget anime standards, while retaining the appearance of Takashi Takeuchi’s character designs to satisfy long-standing fans.

The balance between the serious and comedic elements is also well handled - it is after all a tale filled with obsession, pride, loyalty, angst and pain (not to mention blood-soaked violence), so when the heavier themes are punctuated by lighter moments these respites are a welcome change of pace rather than poorly-timed distractions. The only exception is one episode that goes off at a tangent to explore a side-story concerning Rin, the daughter of the competing Master Tokiomi Tohsaka. It’s clearly a filler episode because it does not contribute to the central plotline, but Rin is one of the most popular Fate characters among fans so even though she’s younger, less magically-capable and is not directly involved in the War this time around, I daresay she makes as engaging a subject of a filler episode as any.

That aside, the narrative is pretty much devoid of needless padding or lapses in pacing: as dialogue-heavy as it can be at points, the complexity to the writing that underpins the allegiances and backgrounds to the characters is impressive; as you might expect from Gen Urobuchi, who penned the light novel on which this adaptation is based. If you are worried that his take on the Holy Grail War is not in keeping with what the original creators at Type Moon intended, rest assured that he’s an experienced scenario writer who is familiar with their previous works, and the Fate/Zero novel was also met with Kinoko Nasu’s approval.

This sense of continuity is maintained in the Japanese language track of this particular production, in that the VAs of prior animated adaptations have reprised their roles. The English language dub is enjoyable in its own right too, and speaking as someone who usually opts for the Japanese with subtitles, I didn’t find it to be jarring or distracting either (I still think Brian Blessed would’ve been the perfect voice for Rider in the English dub though…).

Whichever your personal preference, the musical aspect of the soundtrack is outstanding - although Kenji Kawai provided the incidental music for Fate adaptations in the past, Studio Ufotable instead called upon Yuki Kajiura, another highly regarded composer who incidentally is a personal favourite of mine. Even with that bias aside, her distinctive signature sound is an eclectic and effective one, so it makes a perfect accompaniment for a battle between figures from far-flung lands and eras.

Perhaps the only area in which this particular release is lacking is in the bonus features, which doesn’t include the same range of interesting content that the North American import box sets did. Considering how it is a fraction of the price of the said import edition though, I wouldn’t cite that as anything more than a trifling detail, because what this release represents is the most polished and solidly enjoyable Fate adaptation that has so far reached our shores.

Japanese and English stereo audio with English subtitles.  The only extras here are textless opening and closing credits.

9
At last, a Type Moon TV adaptation that does its characters and source material justice!
LATEST REVIEWS