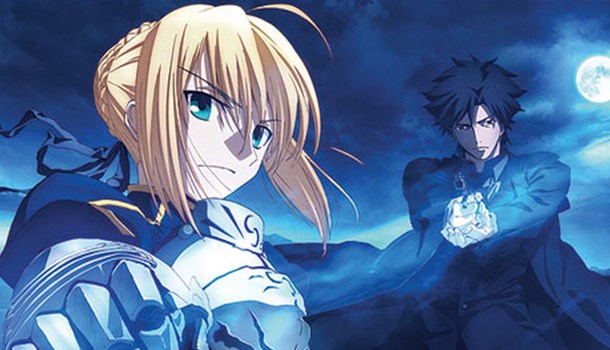 The announcement that another companion to the Fate/Stay Night TV series and the Unlimited Blade Works feature film was to be streamed via NicoNico and Crunchyroll's video streaming services caused a wave of excitement among fans earlier this year. The promise of a new interpretation of the Fate worldview on our screens, telling a new story into the bargain, sounds like a potential highlight of the year. Is it worth the hype surrounding it? In a word, yes, it is.

Fate/Zero is a prequel rather than a sequel though: it’s set ten years earlier, during the previous Holy Grail War in which seven Heroic Spirits from history fight alongside magi ‘Masters’ for possession of the Holy Grail, which can grant the victors any wish they desire. It attempts to flesh out the details of this preceding War that were alluded to in the original story, showing some familiar characters and introducing new ones in the process.

The Fate/Zero novel on which it’s based was overseen by Type Moon’s chief writer Kinoko Nasu but actually penned by Gen Urobuchi (the writer of the screenplay for this year's hit anime Mahou Shoujo Madoka Magica). The producers, Studio Ufotable, are responsible for the Garden of Sinners movie series, another Type Moon work that was well-received by fans and a huge success in Japan, so it’s easy to see why expectations were high.

Some characters in this series will be familiar to existing Fate/Stay Night viewers but others are completely new: Kiritsugu Emiya (adoptive father of Shirou) is competing with Rin Tohsaka’s father Tokiomi and the Church attempt to control the course of the competition by recruiting Kirei Kotomine. A couple of the Heroic Spirit ‘Servants’ are from the original Fate/Stay Night story too but most are completely different.

As you’d expect from a story of magicians fighting alongside historical kings, warriors and sorcerers, there’s emphasis placed on their respective strengths and weaknesses and how this all might affect the war’s outcome. That said, there’s also plenty of discussion concerning the motives and personalities of those involved and this for me is where the Holy Grail War scenario really gets interesting. The character dynamics between them play a crucial role in the plot progression and of course the mixing up of myth, legend and history is fun in itself.

Everyone involved in the war has his or her personal reasons for fighting, and these range from the noble to the desperate all the way through to the downright twisted. At this early stage we know only some of the Servants' real identities (Saber’s true name is revealed almost immediately though, so this is a massive spoiler for those who haven’t watched Fate/Stay Night yet): Rider is a certain King of Conquerors who wants to resume his quest to take over new lands and live life to the full, Archer brings his swaggering arrogance and greed from the earliest days of civilisation and Caster is simply a psychopath who enjoys killing people.

Similarly the Masters are a varied and interesting bunch. Waver Velvet summons Rider to help overcome his inferiority complex, Tokiomi Tohsaka and Kotomine Kirei are allegedly acting in the Church’s interests by summoning Archer and Assassin respectively, while Kariya Matou reluctantly summons Berserker in order to spare Sakura Tohsaka, daughter of Tokiomi, more suffering at the hands of his father Zoken. The complex web of allegiances and relationships are fascinating, but might be hard for the viewer to grasp at first.

It’s important to introduce this extensive cast of characters before any weapons are drawn, but that does mean we’re thrown in at the deep end in terms of how they are all related to each other. The first episode is forty-five minutes in length and contains a lot of significant yet unrelenting exposition: a second viewing of this episode is recommended to fully understand what’s going on but it’s remarkably well handled so is well worth the extra effort.

Director Ei Aoki demonstrated his ability to kick off storylines in this way with Wandering Son and the first Garden of Sinners film – two productions that pick up their storylines quickly and rely heavily on character interaction. It seems he’s handling Fate/Zero's labyrinthine plot with the same degree of success, so viewers who are patient through the opening episode will be amply rewarded with what follows.

That said, we don’t see any lengthy battles until the end of the third episode when Saber meets Lancer. Instead the Masters and their respective Servants make initial plans and the pieces are set in place for later battles; fortunately there are numerous moments of characterisation and even bits of humour to keep our interest. The adjustment that the Servants have to make when they materialise in the modern world is particularly fun to watch, especially in the case of Rider, and there are already personality clashes between them and their respective human Masters.

By the standards of a made-for-TV production the artwork and animation are superb with a moody colour palette and reasonably effective blending of CG. The opening and ending theme tunes are somewhat conventional but the background music score is composed by Yuki Kajiura, a personal favourite of mine whose distinctive fusion of orchestral and electronic with choral chants lends a great amount of depth and atmosphere.

At this early stage Fate/Zero does an admirable job of efficiently introducing the main players, explaining their motives and putting the principal pieces in place. It’s all rounded off with polished presentation and a comfortable balance between comedy and drama; in a side-by-side comparison with the Fate/Stay Night TV episodes this is an improvement in pretty much every aspect. It’s promising us fans the Fate TV adaptation that we’ve been waiting for.

You can currently watch Fate/Zero in streaming form on Crunchyroll.

9
Its introduction is light on action and heavy on dialogue, but Fate/Zero is proving to be intriguing, thoughtfully written and visually impressive. A treat for long-standing fans and newcomers alike.
LATEST REVIEWS