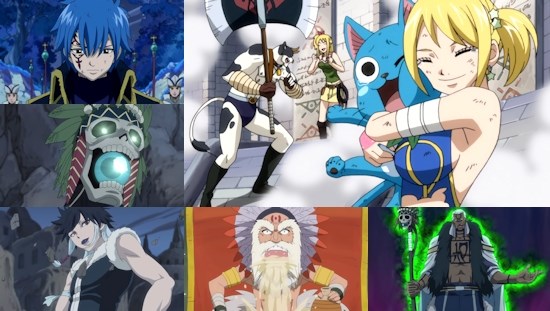 For all of the wonderful worlds depicting within shounen anime and manga, there's always one rather large thorn in the side of these idyllic locations - there always seems to be somebody around who is hell-bent upon obliterating said world, or at least any sense of safety or justice within it, in the name of some maniacal plan or other.

It's just such a situation that we re-join for this sixth volume of Fairy Tail - and the first we've received for review on Blu-Ray, as it happens, so more on that later. The previous batch of episodes left us with Nirvana activated, and all set to wipe out the world's light guilds in the name of darkness. More specifically Nirvana is on the move with a view towards destroying the Cait Shelter Guild, the home of the diminutive Wendy - can it be stopped? Needless to say, our group of heroes are determined to do just that, and they might even have some unlikely assistance to boot.

This help comes courtesy of some of the Oración Seis who, having realised that the ultimate plan to which they now lend their skills really isn't what they signed up for, turn against their own comrades, most notably guild leader Brain. Even this isn't as simple as it might sound, as there is more to this man than meets the eye - a prospect which can also be levelled around the plan pertaining to Nirvana's use as it happens, which appears to be just one part of a far darker, deeper plot.

Even once this particular story arc is over, there's still plenty to Fairy Tail's finest to worry about, much of it revolving around guild members or others close to them, as Jellal's past comes back to haunt him in spite of his efforts against Nirvana, while even Gray shows a surprising side to him that confuses many towards the tail end of these episodes.

As per every other volume of Fairy Tail thus far, there's a good blend of comedy, drama and action on show here once again, although due to the subject matter in question these episodes as a whole tend away from large doses of humour to stick with the drama and tension of events, only rolling out the laughs when that tension needs to be broken briefly here and there. Although this means you'll spend less time giggling at any on-screen shenanigans, it does once again server as a reminder that this series knows how to deliver its content in the most effective fashion possibly - quickly, without prevarication and with a sharp eye for when to break the mood or when to stick with the narrative status quo.

As mentioned earlier, this is the first volume of Fairy Tail that we've been able to check out on Blu-Ray, and it is certainly a step up from watching the series on DVD. Not a major one, admittedly - the series supposedly wasn't even animated in HD, and at times it really shows in shots that don't upscale so effectively - but for the most part it's a cleaner, crisper image that adds an extra layer of quality to its colourful visuals freed of the usual issues which come from jamming a lot of episodes onto a dual-layer DVD after converting it from NTSC to PAL. The same is true of the show's audio quality - it won't be a noticeable upgrade for many, but on a decent setup it sounds just that bit more dynamic. Whether its improvement enough to make the jump from DVD to Blu-Ray is an arguable one, but for our part we'd certainly rather stick with watching future volumes on Blu-Ray now we've experienced this one.

Once again, the show's English voice cast do a fantastic job of capturing Fairy Tail's energy and spirit, making it at least the equal of - and perhaps even preferable to - the similarly enjoyable Japanese audio option for the series. Subtitles are solid throughout, and our only complaint about these discs on Blu-Ray is that they're a literal copy of FUNimation Entertainment's Region A/B masters; FBI warnings, unskippable commercials (without hitting the menu button, at least) and all. As complaints go, this is small fry stuff indeed.

Ultimately, this is another volume of "as you were" from Fairy Tail - it's as entertaining as ever, delivering just the right doses of comedy to avoid diluting the power of its over-arching story arcs which are compelling in their own right. In other words, there's more than enough to keep fans happy here, and with the earlier volumes of the series shortly coming to Blu-Ray this might also be a good point for newcomers to jump on board, as this is clearly a series with legs.

English 5.1 and Japanese stereo audio with English subtitles. Extras consist of US cast commentaries for episodes 64 and 70, trailers, and textless opening and ending themes.