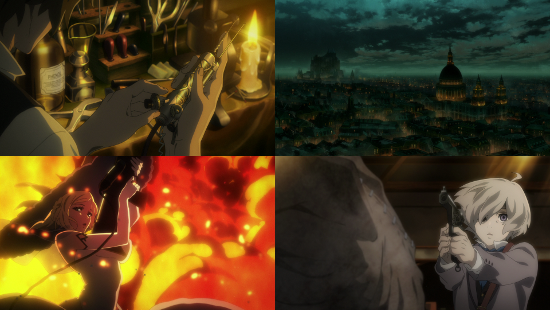 Empire of Corpses, The

Full admission, this Blu-ray release is not my first time watching The Empire of Corpses - I previously watched the film at Scotland Loves Anime 2015, where I got to watch it alongside our Editor-in-Chief, who has previously shared his thoughts on that screening. For this physical release I put myself forward to take a second ride on this film’s rollercoaster, much to the shock of Mr. Hanley who asked me multiple times if I wanted to back out of doing so. Well, I’m still alive and have brought word of how this film fares when shrunk down to the small (well, 40 inch) screen.

The young and inquisitive John Watson has been very naughty and gotten himself in a spot of serious bother. After digging up the recently-deceased corpse of his best friend Friday and re-animating him he is found out by the British secret service, who want to put his knowledge to work in finding the most elusive of prizes in an alternate reality late 19th century gone awry - the notes of Doctor Frankenstein, the man who perfectly re-animated a corpse. Joined by Frederick Burnaby, Watson tours a world that has been revolutionised by the ability to control the dead like puppets, hunting down his prize while desperately trying to dodge the deadly geopolitics of the Great Game.

The Empire of Corpses is an exhausting film, and a second viewing only made me more exasperated with it. The film has an interesting premise and world set up ready to go, and manages to squeeze a good 40 minutes out before sliding into bizarre idiocy on all fronts for the remaining 85. More and more mutations to the story get added, more and increasingly less interesting journeys and locations get piled on, the plot twists and turns on itself endlessly and turns into its own crazy beast, seemingly detached from what you are actually watching. At multiple points you as the viewer - via Watson - are told point blank that things have changed in the background but are not shown any of this, which simply works to contort things further. During all this the characters, story, and general thrust of the work all get chronically diluted to the point of washing away, and by the climax of the film I was once again laid back in my seat thinking “who cares?”

Even when the film deigns to reveal answers to questions you have been harbouring about its cast these come either far too late, or are inserted in during bewilderingly inappropriate moments. This is especially annoying as the first third of the film feels like it is going somewhere with a strong idea and an assurance about it that shepherds you along. It clearly has things to tell and show you about colonialism, geopolitics, being careful what you wish for, and other things besides. It even manages to create a steampunk world that I didn’t immediately want to laugh at. Then you get a loaf of pap, a painfully melancholy ending and an even more bewildering post-credits scene which made me feel like I got punked. Again.

The visuals also get treated to this dilution effect, although not to such a complete degree. The film maintains good character animation throughout, but the initially fantastic backgrounds and the sheer wide-eyed scope and vision present in the presentation slowly ebbs away. The original imagination and wonder that is bursting off the screen when the group are stumbling through Afghanistan gets whittled down until everything ends up feeling uninspired. It still looks good in a practical sense for the remainder, but without its initial verve. By the end of the film you end up looking at yet another grim and visually uninspired zombie outbreak accompanied by a CG monstrosity that obscures the climax. The film does look nice on Blu-ray though!

For this viewing of the movie I watched the English dub created by Funimation, which is pretty good. The cast cannot seem to settle on a stable pronunciation of the name “Halady”, and the Russian accents on display are pretty ropey, but these and other small annoyances don’t manage to drag it down. Jason Liebrecht manages a pretty good performance as John Watson, growling his way through the film with good effect. I have nothing to say about the soundtrack as it made zero impression on me; not good, not terrible.

A final annoyance with this release is that it comes with an unskippable minute long FunimationNow advert which I was unable to speed up in any fashion on my Playstation 4 (Protip: Hit the top menu button to skip these! - Ed).

The Empire of Corpses is 40 minutes of a good movie saddled with 85 minutes of a much worse film that has been surgically grafted on. While pretty, you would need to be a zombie to ignore the wide-ranging issues with the storyline and the utter wasting of the original premise, which makes watching the film a chore.

Audio options comprise English and Japanese 5.1 Dolby TrueHD tracks with English subtitles. Extras comprise movie trailers and promos, and a discussion of the film by the English ADR staff.

4
As much a zombie of a film as some members of its cast, albeit a pretty one.
LATEST REVIEWS