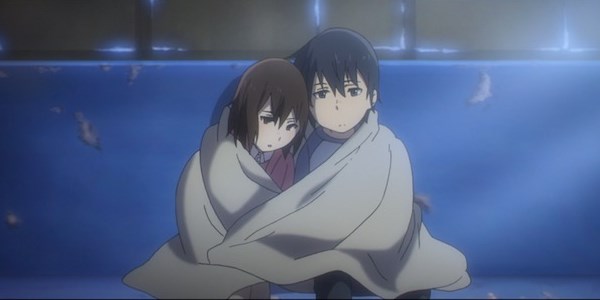 When we last left Satoru Fujinuma he had seemingly failed to prevent the murder of Kayo Hinazuki and change the future, resulting in him being charged with and arrested for his own mother's murder. Determine to try and fix things one last time, he manages to return to his 11-year-old body in 1988. But time is running out, and as "x-day" quickly approaches Satoru must identify the killer before it's too late. It's been a long wait, but ERASED Part Two has finally arrived – encompassing the final six episodes of the series as all the answers are finally revealed.

Transitioning into this second half almost seamlessly, ERASED Part Two itself is also a tale of two distinct parts. The first four of these episodes take place entirely in the past as Satoru makes his final bid to change the future, while the final two return the action to the present day to settle things once and for all. While this means the time-jumping concept that made the initial premise so immediately engaging is a little more understated, it does allow for a nicely flowing narrative as the puzzle pieces begin to fit together. ERASED's mastery of suspense is just as sharp as ever, with each twist and turn conjuring a strong sense of dread when it's inevitably revealed things might not quite be going to Satoru's plan.

Like before ERASED pulls its audience in with the promise of a thrilling, cliff-hanger-laden mystery but it's undoubtedly the characters that you end up staying for. Core cast members like Satoru, Kayo and Satoru's mother Sachiko have already proven their worth and continue to do so multiple times over the course of these episodes, with Sachiko definitely a sure fire winner for "best anime mum" should such a thing ever be awarded. Here they're also joined by Kenya – one of Satoru's primary school classmates that joins him on his quest despite being completely unaware of his friend's time-travelling exploits. His trust and loyalty to Satoru as well as his strong sense of justice are so instantly likeable that it's easy to overlook that he talks and acts far more mature than an 11-year-old conceivably would. But what's undoubtedly even more powerful about ERASED's treatment of its characters is that it still somehow manages to sympathise and humanise those that perform truly the most horrific of acts. Kayo's abusive mother is unlikeable and irredeemably throughout the entire show, but in her final appearance is shown to have her own trauma that spurs (but in absolutely no way justifies) her treatment of her daughter. Despite the show's fantastical premise, ERASED truly excels at painting thoroughly believable characters in a setting of highly volatile emotions.

There is of course one character without reprise though, the one whose identity underpins the entirety of this story. While the eventual reveal of the killer proves to be an incredibly potent moment (despite perhaps not being quite as unexpected as the show might hope), the subsequent fallout and resolution are where ERASED begins to finally show some signs of weakness. With only two episodes dedicated to this time skip (in which things change rather significantly) the series' conclusion goes by in the blink of an eye, as it leans into an additional sci-fi like concept that's so thinly explained that it's hardly necessary in the first place. It then goes on to suggest the concept of an interesting dynamic between Satoru and the killer, but again has no time to expand or develop it. This is the only time where ERASED's run time truly feels like a hindrance. The mystery itself is tightly paced without ever running the risk of overrunning or meandering, but once the cat's out of the bag there just isn’t enough time left to do all that build up justice.

Perhaps even more saddening is these episodes' disappointing treatment of Airi, who is constantly painted as being a major character in the story but due to the way the timelines work out barely appears at all outside of flashbacks sequences. Given that ERASED is full to the brim with likeable characters the loss of one might not seem that alarming, but Airi just feels so underplayed in the series as a whole that it just seems like a huge shame she didn't ever get to do more.

In terms of this physical release the price may still prove to be an issue for some, though admittedly it is an improvement over the first half's incredibly steep £59.99 SRP. It may not take much shopping around to see that both sets can be bought for much lower than their SRPs, but given that the sets only contain six episodes each it still seems worth commenting upon. That said in usual Anime Limited fashion they are doing their hardest to make sure fans get their money's worth, and the inclusion of a book that directly follows on from the first Collectors' Edition's is a very nice touch. But above all the reason you should splurge for the Blu-ray releases here is that ERASED just looks so damn good. Though it probably won't feature on any "best animation ever" lists, the framing and lighting of each scene are consistently perfect, while winter scenery and muted colours give it a cold noir-like aesthetic fitting of show like this.

Though the conclusion may not quite live up to the expectations of its first half, it isn't hard to see why ERASED is considered one of the best murder mystery anime of modern times. Combining a scarily real scenario with just the right dash of sci-fi trickery, ERASED is a powerful series that is then even further enhanced by its incredible cast. Collecting these Blu-ray releases might seem like a heavy investment for a 12-episode series, but this is one show that might just be worth its price tag.

8
A weaker conclusion, but just as emotionally powerful as its first half.