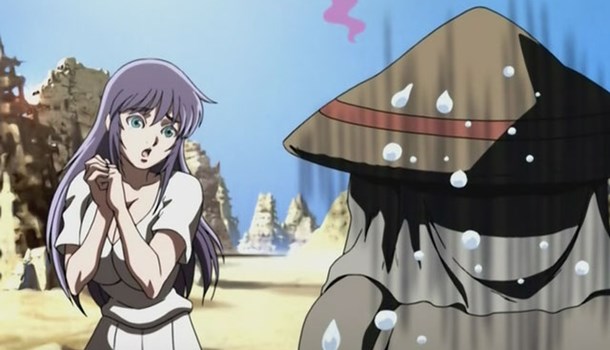 It’s time for another foray into the great Kanto desert with everyone’s favourite lecherous mercenary, Desert Punk. The action kicks off once more with our eponymous hero attempting to protect a desert village from oncoming raiders, although the self-proclaimed “Demon of the desert” really ends up doing more harm than good, especially regarding his intentions towards the village elder’s daughter. There’s also a return of the previously-seen Kosuna, formerly the apprentice of the Shimmer Sniper, now DP’s young sidekick (replete with miniaturised versions of Desert Punk’s trademark gear), and the clashes in the personalities of the two make for some great comedy moments.

Desert Punk is a breath of fresh air as a series, something you can just sit back and enjoy for twenty-something minutes without having to think too much - just sit back, relax, and have a few giggles at the refreshingly juvenile gags. The plots are genuinely feisty and funny; while sometimes lacking some of the punch of the first volume, there are still a lot of laughs to be had here. My personal favourite: Desert Punk using the dark energy of his libido to dispel an ancient curse. Yes, it’s that kind of humour.

In terms of audio quality, Desert Punk’s English dub is still a fantastic asset to the series. Let’s face it; a good dub is really more of a rare treat than it should be in this day and age - and so one as good as this deserves particular recognition. Each character’s dubbed voice seems to fit just right, especially when compared to their original counterparts, and the cast spark off each other brilliantly. The real praise however ought to go to the script writers, who have obviously taken a great deal of care to make sure that no line seems out of place or poorly translated, while still being hilarious and well-paced at the same time.

The animation only adds to the charm of the series. A combination of old-school style and modern polish, the cool and bright visuals are the icing on the cake that is the rest of the show. The characters and settings look very original too. We’ve all seen about a million portrayals of ‘dystopian futures’ and the uninspired design that tends to get dragged alongside them; yet Desert Punk looks and feels unexpectedly unique – perhaps because it never takes itself too seriously.

The final verdict – go for it. Good jokes, cool action, snappy one-liners, what more do you need? Desert Punk is a series that’s just plain fun to watch, and so if you haven’t caught it yet, I heartily advise you to do so.

Aside from the usual textless opening and closing options, there are some trailers of other series, as well as behind-the-scenes footage of the publicity campaign in Japan, and bemusing, yet strangely entertaining clips of the Japanese voice actors for DP and Kosuna larking about on ‘Sunabōzu Internet Radio.’ Definitely worth a look.

9
Action/Comedy fans are in for a real treat here, the “Desert Demon” just gets better and better.
LATEST REVIEWS