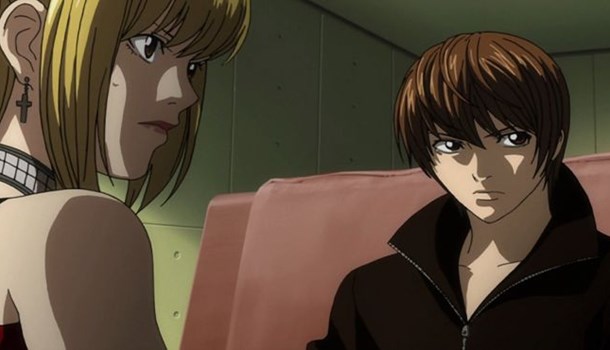 Before I start this review, can I just say that I've tried my hardest not to make this review too spoiler-ific, but be warned that if you don't want even the slightest hint of what happens in the episodes covered by this disc, look away now.

Anyhow, I think it's fair to say that for the past three volumes of Death Note on DVD, I've been immensely enjoying the cunning, intellectual cat-and-mouse game between Light and L, an epic intellectual struggle well worthy of the cost of admission without a shadow of a doubt.  However, all good things must come to an end, and so the fourth volume of the series finally brings this particular battle of wits to a shocking end.

Of course, at this point there are still about half a dozen episodes of the series to go, so this climax is more of a respite than what can be considered an ending - Thus, after a brief recap which takes up half of an episode (why they feel the need to recap well over half-way into a series is beyond me) we jump forward in time somewhat, seeing the beginnings of Kira's "new world order", a world where this mysterious entity and his powers are both feared and revered in equal measure by the general populace.

Life is a little dull for both Light and us humble viewers without anything to really tax his mind however, and the writers of Death Note are more than smart enough to realise this themselves, so we're soon introduced to a pair of new threats to Kira's future and philosophy on life, each with their own unique take on the Kira threat and both equally up to the task of proving to be a handful for Light in their differing ways.  Thus, the "game" begins again for Light, and this time the stakes are even higher.

At first glance, the prospect of Death Note shorn of the Light versus L battle that dominates much of the series isn't a particularly attractive one, and indeed it is rather hard to get used to the prospect.  Thankfully, this imbalance isn't really kept in play for long, as the series soon reverts to doing what it does best - Hatching and implementing ingenious plans that twist and turn to ever more far-fetched conclusions, yet without ever becoming either boring or unbelievable.  Sure, it perhaps loses a little of its lustre after almost thirty episodes of the same general concept (a fact perhaps illustrated by the "shocking" plot progression I referred to earlier not having the emotional impact you might have expected, all things considered), but that doesn't stop it from remaining entertaining.  Add to that the fact that you're more or less dying to know how it all ends by this juncture, and you'd be pretty hard-pressed to pull yourself away from the series at this late stage in proceedings.

So, while the later episodes of Death Note will never quite be able to recapture that fresh, wide-eyed feeling you got from its early instalments, it still remains a must-own series, and as I mentioned in my volume three review even when this show isn't at its best, it can still turn out time and again with compelling reasons to keep watching.