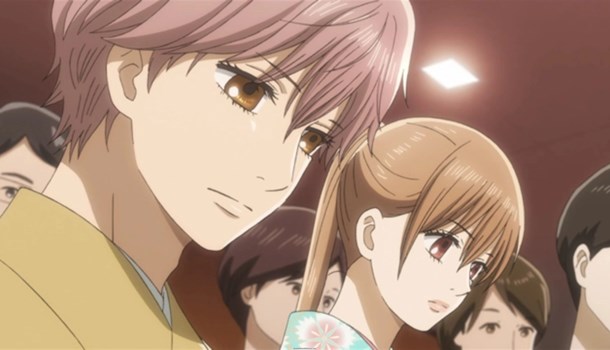 After two reviews with rather divergent opinions between my colleague Elliot and myself, it's up to me to polish off our coverage of karuta-based series Chihayafuru - not simply "because I say so", but because Elliot couldn't bring himself to watch any more of the series; take that as you will if you're looking for a less rosy and glowing opinion of the show.

Certainly, having mapped out its concept, characters and goals pretty clearly over the course of its first half, there are no major surprises across the second half of the series, as Chihaya, childhood friend Taichi and their new-found group of karuta playing friends struggle and work hard to improve themselves and their skills in the name of reaching the top of their respective games, or at least working as a team to do so.

Where Chihayafuru diverges from most manga based around sports or games is that it doesn't allow itself to obsess with the idea that our much-loved primary characters have to win against all odds at the end of it all - in fact, the series as a whole has an inherent and beautifully realised understanding of the importance of defeat, both as part of sporting endeavour and as a useful tool to an individual striving for improvement.  This isn't a sappy "it's not the winning, it's the taking part" philosophy that would be a huge cop-out in such a competitively driven series - far from it, defeat really hurts and isn't always taken with sporting grace by our leading boys and girls, and again the pain of losing and everything that comes with it is one of the stand-out features of Chihayafuru's presentation.  If you've ever lost a big sporting match or important game of some kind, or if you've ever supported a team only to see them slide to a crushing defeat, you'll pick up on the emotions stirred up by this series, and a powerful thing they are too.

With so much focus on the game of karuta itself and its important to both Chihaya and, increasingly, those around her, the major romantic entanglement of the series does largely fall by the wayside as a result.  Arata, so pivotal to the show's early episodes, becomes little more than a side note brought up to push other events onwards when required, while Chihaya and Taichi's relationship has some wonderful, subtle moments (particularly on the latter's part as he wrestles with his feeling) that are nonetheless few and far between.  This does rather echo our thoughts in the review of the first few episodes of the series, where karuta comes to dominate everything - if you aren't emotionally invested (or at least vaguely interested in) the game itself and its impact upon the show's characters, then you may well find that the events depicted throughout leave you cold.

If you can live with that karuta-obsessed backdrop however, Chihayafuru is a fantastic story with many strings to its bow - at times it's a story of growing up and maturing, at others its a tale of forming bonds with others through shared interests be it friendship or something deeper, and on yet another level the series is a near-perfect representation of what it means to dedicate yourself to a cause, and the joy of victory and abject (yet educational) pain of defeat.

As an exercise is summing up life's pleasures and struggles via a simple (or not so simple in karuta's case) game, I'm not sure that Chihayafuru can be beaten - the lack of a "proper" ending aside (all hopes seem to be pinned on a rumoured second season early in 2013), its second half does make some missteps, such as focusing on karuta matches that are inconsequential to us as viewers or a needless recap episode saved only by some sharp humour, but the overall viewing experience will make you laugh at times and cry at others, proving the show's mettle when it comes to examining its particular slice of the human condition and bringing that emotional impact to you via its words and actions.  It's the kind of series that would never otherwise see the light of day in the UK in a million years, but with such a great aesthetic and characters and a hard of gold that doesn't shy away from the spectre of defeat, I for one am incredibly glad that we were afforded the chance to see this little gem legally via Crunchyroll.

7
Despite losing some of its focus during its second half, Chihayafuru is still a triumph in examining the joys of victory and pain of defeat and how those events build its characters.
LATEST REVIEWS