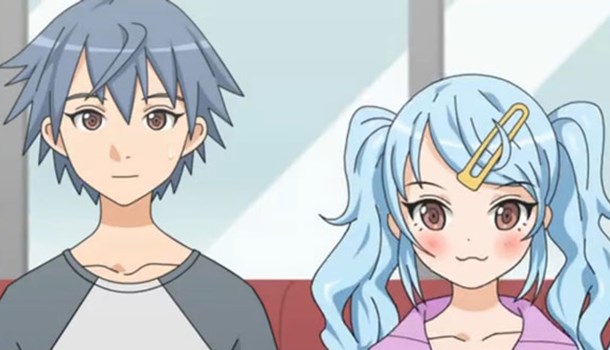 Another three minute comedy series! Lets cut to the chase, shall we?

Average boy with zero defining features, Tokyo resident Kyousuke, one day finds out that his long-estranged sister is coming to live with him after spending ten years apart. (The show re-introduces this setup each episode, so you cannot miss it.) During this time away she has turned into a stereotypical Osakan native, and the show follows the pair as Kyousuke tries to adapt to his sibling’s mannerisms. (None of this is really explained - the show is three minutes long. What do you want, a sweeping plotline?)

Osaka-okan is, to be blunt about it, not funny and a chore to watch. The premise of the show, pointing out amusing regional differences and dialects, is a traditional well for comedy but is pulled off in such a lazy and poorly thought out way that it falls utterly flat. Most of the jokes simply have Namika say something and then show her brother being confused for thirty seconds before moving on to the next gag. There is zero build-up or background to the majority of the jokes, which are expected to be self-evidently funny but just don’t work. The choice of items to base the comedy on feels out of touch - all of the things highlighted are very micro scale items, such as what people call those tiny little UHT milk cups you get for coffee in a cafe. Its pretty hard to get excited about them, especially in the first episode. Looking at broader, more interesting topics may have worked a lot better than going for cheap shots or playing slow-motion spot-the-difference with dictionaries. The show also feels rather one-sided - only the Osakan items are pointed out as being strange, rather than there being an equal exchange of things Tokyo residents do that are amusing.

A lot of my personal distaste could simply be put down to cultural barriers. I admittedly know near-zero about Osaka other than thinking the accent is amazing, but the show fails to give any reason behind its jokes other than throwing them at the screen. I can imagine that someone from Japan may have the same reaction if I showed them the “Yorkshire Airways” sketch. (Note: I have nothing against Yorkshire people!) The level of entry for the show is pretty high and so based upon cultural knowledge and stereotype that is is impenetrable.

Probably the funniest and yet strangest part of the show is in the ending, when Namika sings in the bath about what she has learned during the day. It manages to compress all the “jokes” in the episode into an absurd twenty second tidbit that gave me at least a brief chuckle, if only because it renders the proceeding episode irrelevant.

The audio-visual presentation certainly doesn’t help to lift the show up. While this is a rather cruel way of putting it, the show looks like a hastily thrown together Flash animation. Everything looks slightly creepy, an impression not helped by the show starting with Kyouske staring directly at the viewer with a dead-eyed stare. Arms in particular have a weird way of animating that makes them look like part of a puppet show. It all looks rather dead, although I have to break up this stream of complaints by mentioning that the colour palette looks nice by using pastel colours instead of the normal garish hues. The sound doesn’t help the show much, with the backing tracks sounding like cheap pack-ins that came with the audio software. The whole thing feels tossed together and is actively repellant.

Osaka-okan is a dubious idea executed in a very poor fashion. There may have been a good show if it had been handled better, but such was not to be. Sure, it’s only three minutes long, but you could put those three minutes to much better use. Skip this show and watch something other than this unfunny, poorly thought out thing.

You can currently watch Boku-no-imoutowa 'Osaka-okan' in streaming form via Crunchyroll.

2
Skip this show and watch something else.
LATEST REVIEWS