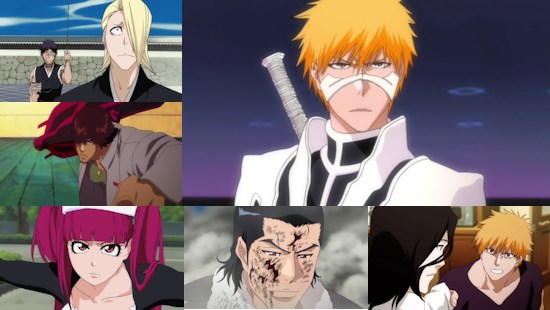 Eight years. 366 episodes. Over six full days of anime measured back-to-back. These are the numbers that define my viewing and reviewing of Bleach on home video since that fateful first volume back in November 2007. Now, the series has finally come to an end (for now at least) with the release of its final UK volume - this is what the end of an era feels like, apparently.

As perhaps the truest reminder of what that viewing experience is like, this final instalment begins with... a filler episode. About flying kites. Sure, there's a little more to it than that, but it's a partial reminder of why this show has fizzled out over the years thanks to far too many moments where it chooses to lean on frivolous nonsense instead of getting on with what it does best.

Thankfully, that solitary episode is just a fleeting reminder of the pains of watching Bleach, and we're quickly returned to the story proper, as Ichigo trains hard to unleash his Fullbring powers and become a fighting force once again. While the unleashing of these powers is hugely important to him however, the behaviour of the group known as Xcution in enabling his use of these powers seems suspect - are these people really to be trusted, or has Ichigo found himself on the wrong side of this particular conflict?

There's little time to dwell on this, as no sooner have his new powers been tamed than our protagonist finds his entire world upside-down, as villain of the piece Tsukishima brings his abilities to alter memories to bear in terrifying fashion. With nowhere left to turn, it seems as if the game is up for Ichigo, but perhaps there are some old friends upon whom he can still rely?

If that first episode represented the Bleach at its worst, Ichigo's descent into despair at Tsukishima is indicative of the series at its absolute best - watching the rug pulled out from under him to leave him effectively powerless makes for a terrific story that isn't blunted by the knowledge that, of course, he's going to turn things around eventually. This is also aided by some excellent visuals and direction to these particular episodes - a moody, muted colour palette and plenty of great shots really drives home Ichigo's despair to more than make up for the cheap and cheerful animation that can be found elsewhere on this set.

Of course, in typical Bleach style everything boils down to a series of one-on-one battles, and in equally typical Bleach style these fights promise much but ultimately fizzle out for the most part until we grind our way through to a satisfying conclusion that wraps up the story but leaves the requisite threads dangling for the show to return in the future. The overall result isn't Bleach at its best, but then again we've been saying that ever since the conclusion of Rukia's rescue from Soul Society at the end of series three.

Still, on balance this has been one of Bleach's better story arcs, and it certainly makes for a good end-point for its anime adaptation that encapsulates everything good and back about it - atrocious filler, then tremendous moments of exhilaration and emotion which ultimately fizzle out a little unsatisfactorily.

In terms of the discs themselves, you know what to expect by this point - okay but not brilliant video quality from Kazé which seems to vary wildly from scene to scene at times and no extras beyond text-free credit sequences in this barebones release. The dub is as solid as ever, subtitles all seem present correct, and everything ultimately just... is.

It's a strange feeling writing what may prove to be my final paragraph about Bleach for this site. It's been a long and sometimes arduous journey, punctuated by bright moments that are as memorable as some of the utter dregs that had me screaming "WHY?!" at the screen as the sheer insipid nature of what I was witnessing robbed me of most of my mental faculties. For the most part, though, it's been a pretty fun ride - one that never matched the majesty of its early volumes but equally one which never collapsed entirely under its own weight. I daren't say it too loudly, but I suspect I might find myself missing Bleach a few months down the road.

Besides, what the heck am I supposed to chain myself down and watch on DVD on a regular basis now?

7
Bleach is over for now, and this final volume encapsulates both the good and bad of the series as a whole in a broadly successful package.
LATEST REVIEWS