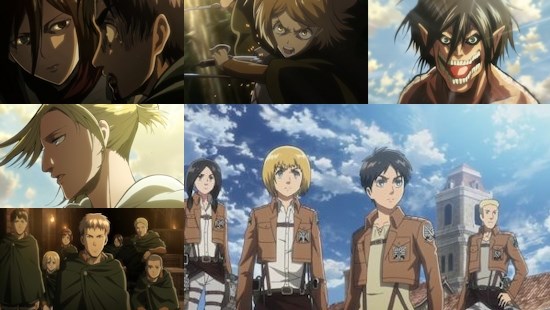 It feels like rather a lot has happened since we reviewed the first few episodes of Attack on Titan back in April - put simply, this anime adaptation has turned from a hotly anticipated one into a massive hit of proportions we haven't seen in a long, long time. With cosplayers as far as the eye can see in events across the globe and everybody talking about the series, is the show's rise to popularity justified in our eyes?

Having been deeply impressed with much of what it offered in those early episodes, much of the remainder of the series - and your enjoyment of it - will be coloured by your view of one particular pivotal event around which the rest of the events within it revolve. Without giving too much away, it's a massive twist in the tale as it relates to Eren in particular that will either breach the limits of your suspension of disbelief or follow as something that you can reconcile and accept in a world where massive and mysterious giants are roaming around eating people for no clear reason.

Assuming you fall into the latter category, then Attack on Titan has no shortage of highlights to bring your way as the series continues to throw its sharp focus upon humanity's struggles to survive in the face of monstrous opposition - opposition which doesn't always come solely from outside of the city's walls, as becomes increasingly clear throughout the show's second half. Where the series excels is when push comes to shove and the show breaks into all-out action - no matter the opponent these events become dizzying, death-defying and fast-paced affairs that never shirks from the fact that death is closer to an inevitability than a possibility, especially once we join up with the Survey Corps tasked with venturing into the outside world in the name of furthering mankind's fight against the Titans. Although the show's willingness to sacrifice members of its cast during the course of its conflicts stops being surprising quite quickly, it never loses its impact - Attack on Titan is a series that's happy to take some time to examine the human cost of its event while also using it as a springboard for those left behind to do some serious soul-searching about their place in the world and whether they really want to give up their lives for the perceived greater good.

Even outside of the cut and thrust of the military forces and their efforts, there are no shortage of other fascinating threads which build up and run throughout the series - there are touches of political intrigue to be found here and plenty of delving into the characters and development of the show's cast as it's built up and thinned out by the ravages of events.

There is a downside to this mix of intense action and more considered periods of narrative introspection however, and that's the pacing of the show which is, to be polite, decidedly uneven. Between those periods where every shot and every moment has you gripped, tense and staring intently at the screen, there are equally periods where you'll find yourself staring at your watch or wondering whether your local supermarket will have stocked up on mustard since you went shopping yesterday. Although there's far too much material here to cover in thirteen episodes, it also feels like twenty-five episodes is too long, and as a result parts of Attack on Titan lumber along slower than the least threatening of the show's titular behemoths.

Although its second half is a marked improvement over the first, this initial streaming and broadcast release of the series suffers from some very obvious animation issues, with a lack of time and budget leading to entire scenes of static shots, reused shots that can easily be picked out and so on. Thankfully this will be cleaned up somewhat by the time the show arrives in physical form, but at its lowest ebb the shortcuts taken with the show's visuals threaten to become laughable and actively impact the weight of some scenes and events.

Pair these pacing and animation issues with that aforementioned pivotal "make or break" point in the story, and we can certainly concede that this series is going to frustrate some to the point where they bail out on it - however, for our money the highs that the series offers absolutely outweighs those low points to ensure that our final impression of Attack on Titan is very much a net positive. At its best, episodes flash past in the blink of an eye, leaving the viewer staggering, exhausted, emotional, but most of all hungry for more. That it manages to deliver more again and again without ever feeling likely to run out of steam is where the show really exhibits its magic, and we can't think of another series that has left us feeling quite this way in some time.

That ability to be both eye-catching and heart-rending in equal measure, thanks to a world and characters that it's easy to care about, is what has taken Attack on Titan's popularity into the stratosphere - it certainly offers an experience that can seldom be found on television via any medium, so for all of its imperfections it's no surprise that this might just be anime's next big breakout hit.

You can currently watch Attack on Titan in streaming form on Crunchyroll. The series has been licensed for a physical release in the UK by Manga Entertainment

8
If you can live with its uneven pacing and stay on-board with the twists in its plot, Attack on Titan is one of the most rewarding viewing experiences of recent years.
LATEST REVIEWS