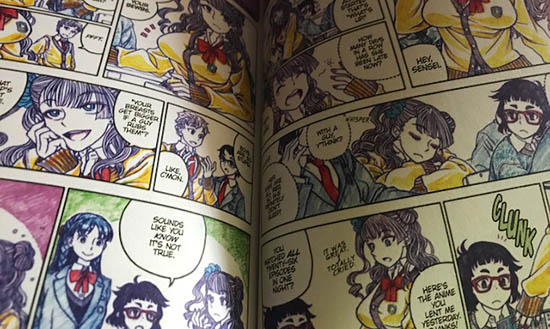 This is an incredibly unusual manga for many reasons, which could have something to do with the fact that the creator (Kenya Suzuki) started publishing it on Twitter, before it moved onto Kadokawa’s ComicWalker website in 2014 and then became a manga in 2015. Rather than following a traditional story arc, it is made up of tiny short scenarios printed over just one or two pages which each address a particular issue that Galko is being asked about.

Galko is one of three female friends that appear in most of the scenarios, with a few other characters interacting at different points. Each of these friends has distinct character traits which the reader is informed of in the side bar on each page. This is potentially put in because there isn’t otherwise much character development, due to the story arcs being so short.

Galko’s primary characteristic appears to be that she has big boobs – the size of which are quite outside the realms of a normal human being, I must point out – but you do gradually learn that there is a bit more to her than that. Her friend Otako is the geeky one and they are often joined by Ojou who is continually referred to as an ‘airhead’ and is also the sporty one.

These girls are not the typical kind of school-girls that you would find in a manga, working hard at school, flirting with boys, looking cute in their school uniforms and basically striving for an unachievable perfection. They are, in fact, asking all the questions you would expect a real school girl might ask during puberty, as well asking some questions out loud that you would expect most girls to keep to themselves! Examples of these questions include:

I have reached the grand old age of 35 and still don’t feel the need to know the answers to these questions and it’s never even crossed my mind to ask. However, maybe somewhere out there, there are members of generation Z who desperately need all this information! I can see how some would find this manga ground-breaking, particularly in Japan, as it addresses issues that aren’t generally discussed in either manga or anime. I, on the other hand, feel that this manga was so focused on crossing a line that it rushed so far over the line it now can’t even see it in the rear-view mirror! I can applaud its honesty, but personally found it crude and vulgar in the unrestrained way these girls talk about bodily functions, sex and anatomy! It actually feels very western in it’s openness, but even western audiences might find it a bit too gratuitous.

All the way through, the graphics are in colour, with an interesting shading style being used to add this in. Except for Galko’s hugely unrealistic breasts, characters are well drawn, interesting and clearly show distinct emotions. The use of colour and background imagery looks original and it’s clear that Kenya Suzuki is a skilled artist with a unique, interesting style.

If you feel you need the answers to the above questions then maybe this manga is for you, but if you’re happy to live on in blissful ignorance then maybe give this one a miss.

4
If you are worried about things like whether 'girls breasts get bigger if a man massages them?' look no further!
COMMENT AND DISCUSS
blog comments powered by Disqus