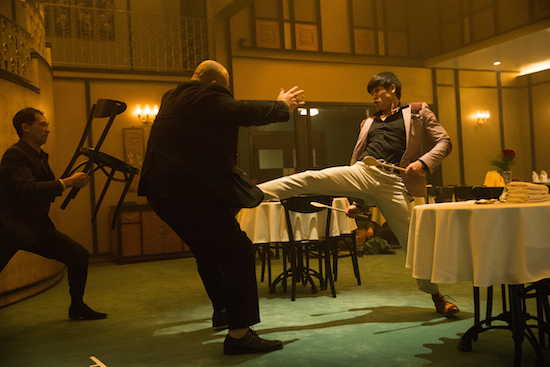 Birth of the Dragon

On paper, Birth of the Dragon comes across like a bizarre hybrid of a presence. A fictional account of a supposedly true event revolving around a pre-fame Bruce Lee challenging kung fu master Wong Jack Man to a fight in 1960s San Francisco, the movie in many ways seem to revel in its own myth-making. The big-screen, dramatic equivalent of real life prize fights, if you will. But peel back the hubris, and the film turns out to be an engaging, well-told story of rivalry, differing ideals and - of course - a veritable frenzy of fistwork.

Philip Ng’s Bruce Lee is a magnetic screen presence - precocious to the extreme, confidently cocky and firm in his belief the world revolves solely around him. In this manner, Birth of the Dragon is much like its central role - resting easy on a script that resounds with boyish, fratboy humour - with a snappy simplicity to everything that sees it aiming squarely at its target market. But just as you think the movie will play to form, delivering a predictable preamble to its much-touted central punch-up, it starts to unfold; revealing layers of surprising depth.

As we are introduced to the deftly serene Wong Jack Man (played excellently by Xia Yu), we begin to get a better picture at what becomes the heart of the movie - the difference in philosophies between Lee and Man. Lee is all braggadocio and pride, desperate to revel in his own burgeoning celebrity and the introduction of Kung Fu to the Western world. Man, on the other hand - is rooted in tradition, spouting ancient Chinese philosophy with a detached coolness. As the two butt heads, with young American Steve McKee as a go-between torn between their two styles, the movie offers up a sensitivity to its subject matter that feels genuinely considered, and at times, even moving.

Attempting to tell what is fundamentally a Chinese story within a Western cinematic system, is something to be celebrated - and while Birth of the Dragon doesn’t get it all right, its refreshingly transnational spirit feels like it has its heart in the right place. Likewise, while the efforts to depict an interracial romance in 60s America are admirable, this clumsily handled sub-plot feels way too rushed, and tonally at odds with the rest of the movie.

Thankfully, the movie’s main attraction - the fight scenes - deliver in full. While the camera work can feel a little aloof at times - a step down from some of the more frenetic, daring styles coming up of the East right now - it's more than made up for by the choreography itself. The epic finale bout between Lee and Man is every bit the edge-of-the-seat, heart-in-mouth moment you'd hope it’d be - jacking up the thrills with a palpably physical intensity as it leads us through a lyrical depiction of their differing styles and fighting mentalities.

Seen as a whole, Birth of the Dragon feels like it treads a razor-thin line between cheesed-up cliche and flamboyant cool, a dangerous dance in which it’d be too easy to dismiss the movie as another beer and pizza crowd-pleaser aimed at the hardcore martial arts flick fanbase. It's better than that - and though its jocular, wise-cracking nature ends up being a bit of a double-edged sword, the lasting impression is of a movie that fights well above its weight. Birth of the Dragon slips in neatly to a post-John Wick world where a degree of respect has been rekindled for fighting movies that are more than just testosterone fuelled background noise - offering up genuinely decent storytelling to match the fight scenes punch for punch. The movie may have been a critical and commercial flop on its original American release last year - savaged over issues ranging from whitewashing to the fictitious elements of its plot - but we’d argue it deserves a second chance, if anything, simply for daring to be that bit better than a movie like this usually has any right to be.

8
Turn up for the kick-ass fight scenes, stick around for the surprising sensitivity.
COMMENT AND DISCUSS
blog comments powered by Disqus