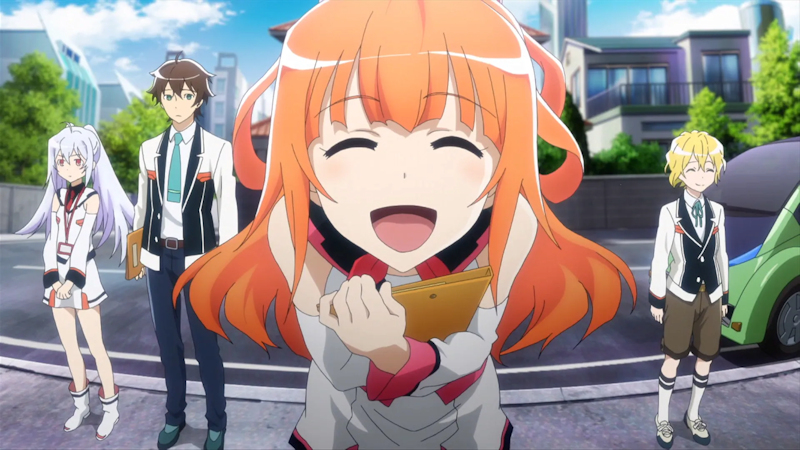 In a future where androids with thoughts and feelings coexist with humans, there are many aspects of the story that seems familiar. The androids here are called Giftias, which can serve a multitude of roles depending on what a family needs. They are typically hired to fill a void in a family's life, such as a child model for those who cannot conceive or have lost a child of their own. They have a limited lifespan however, and regardless of the model type they can only function for 81,920 hours - which is about 9 years 3 months and 2 weeks. When a unit reaches the end of their lifespan they have to be collected.

Collection is handled by the SAI corporation's terminal office teams - of course the bare bones setup is reminiscent of the sci-if classic Blade Runner, but whilst there are certain similarities, this is very different in tone and style.

When we are introduced to this universe we are not shown lone agents facing rogue units in a dystopian future. Instead we have a bright world that is not too dissimilar from our own. The SAI Corp terminal office teams consists of a human who is known as the spotter and a Giftia who is referred to as the marksman.

The story begins with the main protagonist, Tsukasa Mizugaki, joining the Terminal service department. He is 18, fresh-faced and has limited real-world experience. He has been assigned to the team and hits the ground running with little understanding of the needs of the role. Regardless, he is eager to learn and be successful in his new job. He is partnered with a female Giftia with purple hair called Isla, and while she is knowledgeable, she has been in reserve for a while.

Whilst Giftias are portrayed to be commonplace in everyday society, it becomes apparent that Tsukasa has no real knowledge of them. This is clear on his first mission where things go disastrously wrong.

The series is broken down into multiple assignments, and there's plenty of humour and touching moments with the recovery of each unit. There are some dynamics between the families and their units that you could see happening in the real world. That’s a nice touch as it leaves you thinking, and each mission presents their own respective challenges.

First conceived as an anime before being adapted into a manga, Plastic Memories was  was created by Naotaka Hayashi, the original writer for the popular Steins; Gate. The show uses character designs by Okiura, while production was handled by Doga Kobo (YuruYuri). Yoshiyuki Fujiwara who has worked previously on attack on Titan, Sword Art Online and many others was in the director's chair.

Initially the series comes across as a serious piece of science fiction. It tackles the question of how humanity might deal with A.I. as it becomes more sophisticated and made to look like us. However, if you pull away the futuristic setting of this intriguing  world, which has interesting and sometimes disturbing relationships between humans and the respective units, you find something far more familiar to anime fans.

Beneath the gloss, you have the age-old story of a young, inexperienced man forced to live with a woman (in this case a co-worker), learning how he feels and developing a relationship. Add in a fiery female tsundere type that openly gives him a hard time whilst secretly harbouring affections for him, you suddenly realise that this is another humorous harem series with touches of fan service.

The question is, does it work? That’s subjective. The environment itself seems very interesting and I wanted to learn more of this world. However, the opening episodes imply a depth that you realise is not there (or at least not fully thought-through) as it is clearly not what the author wanted to focus on.

As a young romance it works quite well. The script has the right pace and you do see great developments between the characters. You also have the perpetual ticking clock as you see our protagonists get closer whilst simultaneously Isla's lifespan shortens.

The humour works where inserted, though nothing to have viewers rolling in the aisles, and while there is some fan service, it isn’t overly abundant.

I was personally confounded though. I can see that the author's main aim was to draw the viewer into emotionally investing in Tsukasa and Isla's relationship, but the problem is that by the time it became apparent that was the true intent of the series I was too invested in the science fiction aspect. So I enjoyed their blossoming romance but I was disappointed to not to see more of the world they inhabit. It feels like a wasted opportunity.

In terms of production, the music was nothing particularly special, but the animation was very good, making the series enjoyable to watch, even if the story felt underwhelming.

If the author's intent had been to focus on a light slice of life comedy in the future, the intent should have been sign-posted earlier on with the other elements downplayed. Instead he gives us a tantalising glimpse of what he could do with this world he created and ends up with neither aspect, future or romance, being as strong as it could have been.

For romantic intetplay with A.I, you may be better served with classics like Chobits or Mahoromatic.

It's a solid, watchable show, but little more. Let's see if things improve with part 2.

6
Fantastic future setting with harem humour, but never lives up to its full potential.
COMMENT AND DISCUSS
blog comments powered by Disqus